The 2021 Armada should feature Nissan's latest version of the V-Motion front grille and a pair of C-shaped LED headlights for a more distinctive look.
By : HT Auto Desk
| Updated on: 08 Dec 2020, 11:31 AM 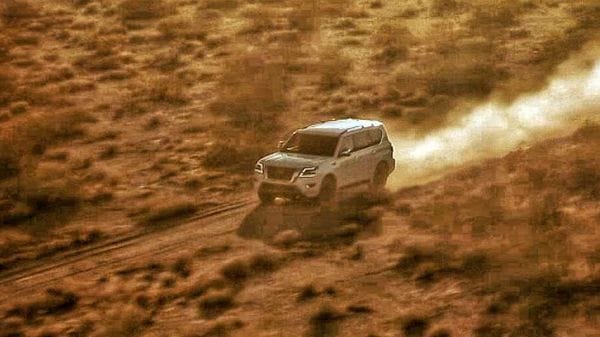 Nissan teased this image and a video of the facelift version of the Armada SUV ahead of its unveiling on December 8.

Nissan has released the first teaser video for the upcoming Armada 2021, the revamped version of the full-size Japanese SUV with body on frame.

The 2021 Nissan Armada will be unveiled on December 8 alongside the refreshed Kicks SUV, with a refreshed exterior look and more modern technology. In fact, the updated Armada should be visually quite similar to the Patrol that made its debut in the Middle East in 2019.

Like the Patrol, the 2021 Armada should feature Nissan's latest version of the V-Motion front grille and a pair of C-shaped LED headlights for a more distinctive look, while the rear has LED taillights. redesigned, along with the new lights, front and rear bumper designs.

Nissan aims to step up its game within Armada 2021, with new, more luxurious materials and, of course, more modern technology than the previous model. The latest Patrol adopts an Infiniti-style centre console that features dual screens, additional padded seats, and a range of the company's latest safety systems.

There is no confirmation on what will be at the heart of the Armada SUV. The outgoing Armada SUV was offered with only one option - a 5.6-litre V8 unit producing 390 horsepower and 534 Nm of torque, combined with a seven-speed automatic transmission and an optional four-wheel drive system.

Nissan had launched the first generation Armada SUV back in 2003. The second generation of the Armada SUV, introduced in 2017, is now undergoing facelift and will be launched as the third generation model.