Jeep Wagoneer makes a comeback as a full-size luxury SUV

The new-gen Wagoneer is a very significant model for Jeep since it represents the revival of an iconic name plate.Grand Wagoneer is the first three-row model for the brand since the Commander.
By : Prashant Singh
| Updated on: 03 Sep 2020, 09:19 PM 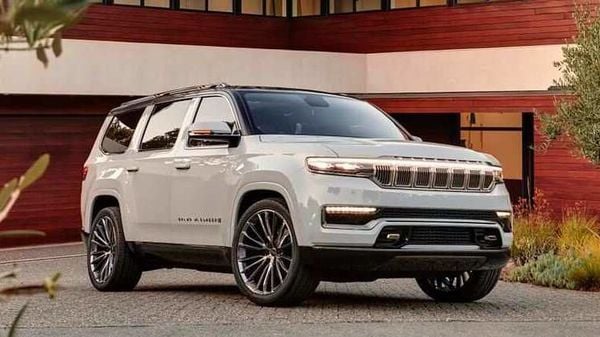 Jeep on Thursday revealed the much-anticipated Wagoneer 2021 and it has transitioned into a full-size luxury SUV in its brand new avatar. The production of the new Wagoneer will start from mid-2021 and it will be made available in two iterations - Wagoneer and Grand Wagoneer.

The production-spec model won't likely be much different than the concept model. Its manufacturing will commence at the FCA’s Warren Assembly Plant in Michigan.

The new Grand Wagoneer is a very significant model for Jeep since it represents the revival of an iconic name plate and it is also the first three-row model for the brand since the Commander. With the return of the Wagoneer, Jeep also steps into the full-size SUV space.

The new Grand Wagoneer is actually an SUV version of the Ram 1500 full-size pickup. Both the models feature body-on-frame construction, but the Jeep comes with an independent rear suspension setup. As far as size is concerned, it is comparable with the Chevy Tahoe and Suburban, albeit the company is yet to provide dimension details of the new Wagoneer.

On the outside, the Grand Wagoneer concept features a very brash design expected from a full-sized luxury SUV from Jeep. It is decorated with a very heavy dose of chrome all around and massive 24-inch wheels contribute to its hulkish appearance. It features an intricate detailing inside its lighting elements, badging, and grille. Unlike previously speculated, it doesn't have much influence from the iconic Wagoneer models.

Jeep has remained tight-lipped about the mechanical details on the new SUV. All that's known currently is that it gets some sort of plug-in hybrid drivetrain. Expect the final model to feature the same powertrain as the Ram 1500 which comprise hybrid-assisted 3.6-liter V-6 and 5.7-liter V-8 gas engines and also likely a turbo-diesel 3.0-liter V-6.

The Jeep Wagoneer and Grand Wagoneer will start arriving at the company's dealerships by the later part of 2021. It is likely to cost in the range of $60,000 to over $100,000 in the US market.