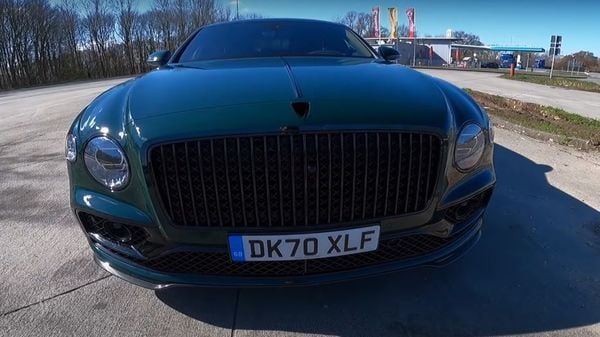 When it comes to a Bentley, any Bentley, a luxurious ride fit for kings is what comes to mind almost instantly. And yet, to not speak of its performance capabilities would be quite a shame because underneath all the opulence is engineering that is perfected for propulsion. In a recent video from the fast lanes of German Autobahn, a Bentley Flying Spur on the move shows just what it is capable of while on a 'blink-n-miss' move.

The video, uploaded on Youtube, shows a driver putting the latest Bentley Flying Spur to its limits as the car hits 280 kmph in an almost effortless motion. While there is some traffic on the road, the person behind the wheel waits for an open stretch before putting pedal to the metal. That the awesome acceleration kicks in instantly also helps reach the lighting quick speed.

The German Autobhan has vast stretches that legally allow for such speeds to be achieved. The country has around 13,000 kilometres of such highways, an ideal playground for road-legal sports cars to be experienced in their completely glory.

And while the Bentley Flying Spur isn't actually classified as a sports car, its twin-turbo 4.0-liter V8 engine is more than capable of giving a tough fight to the flashiest of cars in the next lane. With 542 hp at its disposal and mammoth 770 Nm of torque, this Bentley is a beautiful beast with the heart of a speed demon. The eight-speed dual-clutch transmission also helps the car notch up speeds that would leave most others trailing and put the car in Sports mode - as is seen in the video above - and here is a car that can throw caution to the wind.

The Bentley Flying Spur has a top speed of around 320 kmph and can sprint to 100 kmph in just 3.9 seconds.