The Ferrari LaFerrari was the company's first mild hybrid hypercar that was showcased nearly 7 years ago. It is not in production anymore.With a 6.3 litre V12 engine capable of 789 horses, the car's mild hybrid system ramps up the total power out to 950 horses.
By : HT Auto Desk
| Updated on: 17 Apr 2020, 07:07 PM 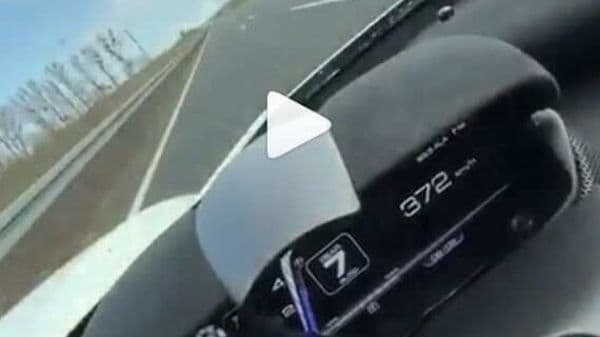 A Ferrari LaFerrari hypercar races down the German Autobahn at blazing speeds. (Photograb from video posted on Instagram by speedtimers)

Ferrari supercars are renowned the world over for being lightning quick. And Autobhan German highways are renowned the world over for allowing cars to be just that- lightning quick. So when the two come together, it makes for quite a spectacle that could well be missed in the blink of an eye. Fortunately for speed aficionados, there's a video footage that shows a LaFerrari hit 372 kmph on these highways.

The Ferrari LaFerrari was the company's first mild hybrid hypercar that was showcased nearly seven years ago. With a 6.3 litre V12 engine capable of 789 horses, the car's mild hybrid system ramps up the total power out to 950 horses. This helps it go from stationery to 100 kmph in a little under three seconds.

(Also read: What it’s like to drive 300 miles per hour in a Bugatti Chiron Longtail)

In a recent video posted on Instagram, a LaFerrari is put to the test in a clean section of the Autobhan and it passes with flying colours - and sights. The car blazes at almost literally lightning speed. While the car's claimed top speed is 349 kmph, it is crossed effortlessly as it pushes the limits to reach 372 kmph which is when the recording ends.

The production of LaFerrari was brought to an end in 2016 with the introduction of Ferrari LaFerrari Aperta which brought in several improvements to the original car. The original, however, is clearly quite a thrill ride in its own right.