Tesla needed only a year to construct its first overseas assembly plant in China and last month started deliveries of locally built sedans.By March, it plans to begin handing over Model Ys to customers, months ahead of schedule.
By : Bloomberg
| Updated on: 04 Feb 2020, 10:02 AM 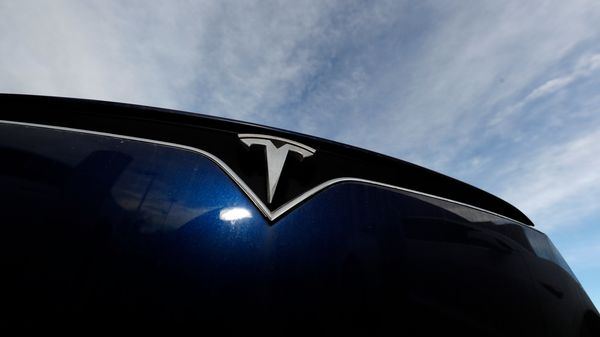 FILE - In this Nov. 10, 2019, file photo the company logo shines off the grille of an unsold 2020 Model X at a Tesla dealership in Littleton, Colo. Tesla reports financial results on Wednesday, Jan. 29, 2020. (AP Photo/David Zalubowski, File)

For a few tumultuous years, Tesla Inc. gave the bulls reason to believe and bears reason to doubt. Sure, Elon Musk was pulling off what legacy automakers tried and failed to do -- make electric cars cool -- but he was presiding over an inexperienced enterprise, and the old guard would catch up.

As Tesla observers try to understand how and why the stock has tripled in a little more than three months, analysts and Musk’s own rivals are second-guessing the notion that the Model 3 maker will be caught anytime soon.

“There’s a recognition that Tesla is in a preeminent position in terms of EV technology," Peter Rawlinson, the chief executive officer of upstart Lucid Motors Inc., said in an interview Monday at the BloombergNEF Summit in San Francisco. “They’re even further ahead than has been reported, and I think the gap is widening, not closing."

The praise echoes comments made recently by the CEO of Volkswagen AG, the world’s largest automaker. Tesla usurped the German manufacturing giant by market capitalization on Jan. 22. Not even two weeks later, its $140.6 billion value exceeded VW’s by about $50 billion at the close of Monday trading.

Cars will “become the most important mobile device," VW’s Herbert Diess told top executives at an internal meeting last month. “If we see that, then we also understand why Tesla is so valuable from the view of analysts," he added, lamenting that VW isn’t also looked at as tech-like.

Rawlinson, who was chief engineer of the Model S before joining Lucid in 2013, wasn’t always this positive, even going so far as to talk down his former employer’s product.

“I contend that Tesla is not truly luxury," he told Bloomberg News in September 2018, when Lucid had just secured a $1 billion investment and Musk was less than a month removed from trying and failing to take Tesla private. Rawlinson said then that Teslas were “premium and high-tech, but not luxury." On Monday, he reiterated his view that the interiors of Tesla’s cars fall short.

But since that earlier interview, Musk has built a commanding lead in the still-fledgling U.S. EV market, and the Model 3 has risen to become one of the top-selling cars in Europe -- electric or otherwise. Tesla needed only a year to construct its first overseas assembly plant in China and last month started deliveries of locally built sedans. By March, it plans to begin handing over Model Ys to customers, months ahead of schedule.

“We think they are pretty far ahead in battery and EV technology," Adam Jonas, an analyst at Morgan Stanley, said in an interview. “Tesla has moved from being seen as an auto stock to be seeing as a tech stock" that is “mentioned in the same breath as Amazon, Apple and Google."

Global carmakers from VW to General Motors Co. are pouring billions into electric vehicles, trying to capture some of Tesla’s stock-market mojo while also meeting tighter emissions standards around the world. But the inferior battery range of recent EV entrants including Audi’s e-tron crossover and Porsche’s Taycan sports car show how far legacy automakers are lagging behind, Rawlinson said.

“I’m not being critical of the Germans -- it’s wonderful they’re creating these cars and coming in," he said. “But it just shows much of this technological gulf remains."

Lucid’s debut model, the all-electric Air sedan, is scheduled to start production in December, and the company hopes to deliver 15,000 units in the first year. Pre-production versions are exceeding 400 miles of range in testing, Rawlinson said.

Musk said during an earnings call last week that the Model Y crossover will have 315 miles of range, which would handily beat the Audi e-tron and Porsche Taycan’s U.S. Environmental Protection Agency-estimated ranges of just over 200 miles.

Traditional automakers are at a disadvantage when it comes to building battery-electric vehicles because they have to keep spending money and resources on combustion-engine cars, which influences how they think about vehicle design and battery-pack efficiency, Rawlinson said.

Even automakers such as VW and GM, whose pockets are deep enough to invest in dedicated EV platforms, are behind because they don’t put a high enough priority on developing EV technology in-house, he said. Traditional manufacturers and even some EV startups “are saying the electric powertrain is already commodified, that it’s not a differentiator."

Lucid will announce a contract with a major cell maker soon, but battery chemistry is only part of the battle. Pack architecture, software and thermal management are just some of the elements necessary to achieve superior range, Rawlinson said. The company is beginning to seek funding for a new electric SUV based off the same platform as the Air.

In the meantime, Gene Munster, a reliable Tesla bull, says that while it’s premature for the electric-car maker to be valued like Apple Inc., the comparison will gain credibility as long as Musk keeps increasing revenue.

“The thesis for Tesla’s business miracle is rooted in the handful of years that the company operated with effectively no competition," Munster, managing partner of the venture capital firm Loup Ventures and long-time Apple analyst, wrote Monday in a research note. “Tesla has nearly a decade head start in EVs as other automakers under-invested in the space."