Tesla's Chinese plant, which was completed in record time as it sped through approvals and construction, represents a cornerstone of Elon Musk’s plans to make Tesla a truly global carmaker.
By :
| Updated on: 07 Jan 2020, 03:02 PM 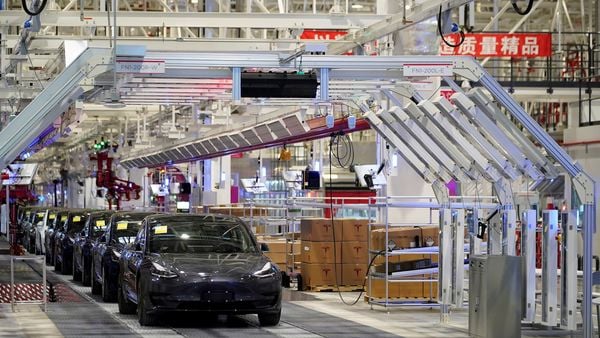 Tesla Inc. kicked off production in China, marking a major step in Chief Executive Officer Elon Musk’s global push for electric-vehicle domination and heralding what could be the dawn of real competition in the world’s largest EV market.

Musk presided over a ceremony on Tuesday at a new multibillion-dollar plant near Shanghai — its first outside the U.S. — where the American company handed over the first China-made Model 3 sedans to the public, the first one being a white sedan going to a man from the nearby city of Wuxi. Technically, deliveries began last week but those were to employees.

Local production could help Musk build on recent momentum for the company in the country, which is also the world’s largest market for normal gas guzzlers. Tesla is storming into China with prices that aren’t much higher than those local manufacturers such as NIO Inc. and Xpeng Motors, while undercutting global giants such as BMW AG and Daimler AG.

Musk also introduced the Model Y crossover for the Chinese market, saying that demand for the vehicle will probably outstrip that of Tesla’s all other models combined. Other plans include forming a design-and-engineering center in China so that Tesla can eventually develop a brand new car from there, he said.

The Chinese plant, which was completed in record time as it sped through approvals and construction, represents a cornerstone of Musk’s plans to make Tesla a truly global carmaker. The company in November announced plans to build a factory in the middle of Germany’s automotive heartland to cater to burgeoning European demand for EVs.

Musk’s flagship company, named after famed inventor Nikola Tesla who died 77 years ago today, will now need to avoid a repeat of the glitches it experienced in its original car factory in California, where the company went through months of what Musk called “production hell" as it ramped up Model 3 production. After consistently falling well short of the CEO’s ambitious targets, the electric-car maker burned through billions of dollars and came within weeks of running out of money.

Lately, Tesla shares have been on a tear since the company reported a surprise quarterly profit in late October. The carmaker is on much steadier footing, having worked out the kinks that limited initial production of the Model 3 and managing to far outpace sales of many other automakers’ electric vehicles in the U.S.

The China plant is already assembling more than 1,000 cars a week, and aims to double that rate over the next year, Song Gang, the manufacturing director at the facility, said on Dec. 30. The company has said it plans to ramp up production to 150,000 Model 3 vehicles a year, of about 3,000 a week, when the first phase of the factory is completed and the company plans to boost production capacity to 500,000 a year after the following phase, although it isn’t clear when exactly Tesla expects to achieve those goals.

Musk’s charm offensive in China has appeared to pay off. Originally just a muddy plot about a 90-minute drive away from Shanghai’s city center, the China plant has quickly come online since it broke ground at the start of 2019. It took twice as long for Tesla’s Gigafactory near Reno, Nevada to begin churning out batteries.

Back in China, Tesla has been winning various concessions from local authorities ranging from approvals to preferential loans — all the more notable given the trade war with the U.S.

Various government officials including Mayor Ying Yong and Zhu Zhisong, deputy secretary-general of the Shanghai municipal government, were among the dignitaries attending Tuesday’s event. Vice Mayor Wu Qing said at the event that no foreign company has invested in a bigger manufacturing facility in the country.

Additionally, the locally built car was included last month on a list of vehicles qualifying for an exemption from a 10% purchase tax in China. It also qualified for a government subsidy of 24,750 yuan ($3,560) per vehicle.

The subsidies have helped Tesla cut prices, with the company announcing last week it would reduce the starting price of the Model 3 by 9% to 323,800 yuan and down to 299,050 yuan after subsidies. Prices could go down further as people familiar with the matter have said Tesla is considering further lowering the price of the sedans by using more local components and reduces costs.

About 30% of the parts now used by the Shanghai facility are sourced locally, and the company plans to increase that to 100% by the end of 2020, said Song, the manufacturing director, on Dec. 30.

Those prices put Tesla closer to some models from domestic EV makers, such as Xpeng Motor’s latest P7 sedan, which starts at 240,000 yuan. NIO’s SUVs start from as high as 358,000 yuan.

Volkswagen AG’s Audi plans to start selling nine new-energy-vehicle models in China during the next two years, with more than half of them being pure battery-electric. The first electric model, the E-Tron, debuted in November at a starting price of about 693,000 yuan. Daimler’s Mercedes-Benz made its EQC available in October starting at 580,000 yuan. BMW plans to start building the iX3 crossover in China next year and is working with a Chinese partner to electrify its Mini model.

To sum it all up, so far so good but it remains to be seen whether Musk capitalizes on his winning streak to conquer the Chinese market.