Most of the cars reportedly had valid passes and had to pass through 'intensive checking' at busy intersections of the city.
By : IANS
| Updated on: 05 May 2020, 04:31 PM 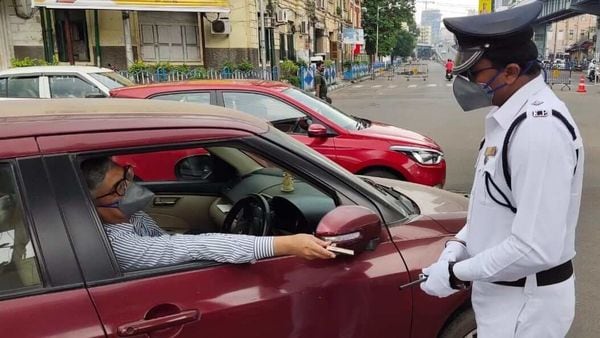 Large number of private vehicles were seen plying on the roads of state capital Kolkata and its adjoining districts on Tuesday. (Photo courtesy: Twitter/@KPTrafficDept)

Day after West Bengal government announced a bunch of relaxations in the third-phase of nation-wide Covid-19 lockdown, a large number of private vehicles were seen plying on the roads of state capital Kolkata and its adjoining districts on Tuesday.

According to police sources, the numbers of private vehicles on the road were visibly high on Tuesday but most of them were following the guidelines of the state government. The city police personnel also carried out intensive 'Naka-checking' at various important traffic intersections like Ruby crossing, Park Circus, Shyambazar 5-point crossing etc. across the bustling eastern metropolis.

Earlier, the Mamata Banerjee-led state government had announced Kolkata as a Red Zone area with as many as 318 containment pockets across the city. Besides this, three other adjoining districts like Howrah, North 24-Parganas and East Midnapore were also declared Red Zone districts by the state administration at the time of Covid-19 pandemic.

(Also read: Things to remember before taking out your vehicle in Red Zones)

State Chief Secretary Rajiva Sinha on Monday evening said that private cars would be allowed to hit the road with valid e-passes from Tuesday. "But there should be only three passengers in a car including the chauffer," he told a press conference at state secretariat Nabanno.

In a separate incident, hundreds of migrant workers returned home by a special train from Ernakulam this morning. The train came to Hooghly's Dankuni station where they were welcomed by their relative and two State government ministers - Tapan Dasgupta and Malay Ghatak.