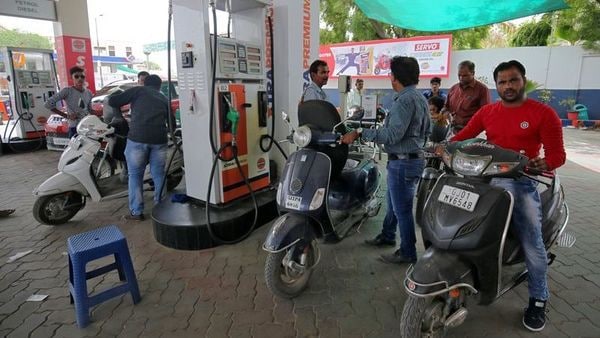 People get their two-wheelers filled with petrol at a fuel station in Ahmedabad.(File photo)

Petrol price today was increased by 30 paise per litre by oil companies, making it expensive by almost ₹12 per litre since May 4. The latest hike comes as part of upwards price revision that has taken place almost every alternate day in the past 75 days.

Diesel continues to be spared from further hikes for now as oil companies kept the price of the fuel unchanged.

Petrol price in Delhi today has touched ₹ ₹101.84 per litre after the fresh hike. Delhi was one of the last major cities in India to see the price of petrol breach Rs-100-per-litre mark earlier this month.

Petrol price in Mumbai continue surge as the latest hike has taken it closer to ₹108 per litre. A litre of petrol will cost ₹107.83 today in the capital of Maharashtra. The price of petrol in Kolkata stands at ₹102.08 per litre, while the price is ₹102.49 per litre in Chennai and ₹105.25 per litre in Bengaluru.

The latest hikes has also come at a time when global crude oil prices have gone up in the past few days. Since the beginning of the month, international oil prices have been quite volatile as Brent crude jumped to $77.16 a barrel, its highest the last three years. However, once supply concerns were addressed, the price came down to $73.59 a barrel on July 16.

In order to bring down the cost of fuel in India, the Centre has set a target of 20 per cent ethanol-blending with petrol in the next three years. On Friday, Union Commerce and Industry Minister Piyuh Goyal said that the government's ultimate goal is to have 100 per cent ethanol-run vehicles. Ethanol-blended petrol is likely to cost significantly lower than at present.