Mahindra Logistics had rolled out the initiative in Maharashtra earlier this week to help reach oxygen cylinders to medical facilities across the state.
By : HT Auto Desk
| Updated on: 05 May 2021, 03:47 PM 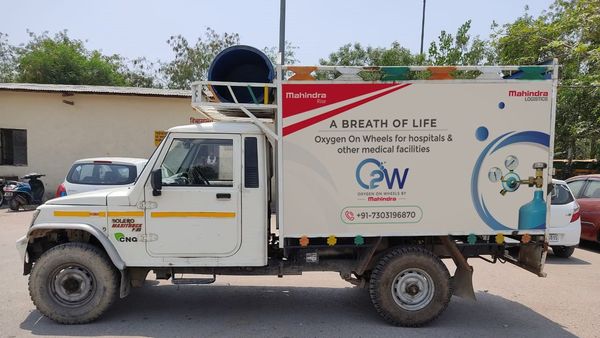 Mahindra has extended its Covid-19 initiative 'Oxygen on Wheels' in the national capital too. Mahindra Group chairman Anand Mahindra has confirmed that the company is scaling up operations in Delhi where crisis of oxygen has been a challenge in the fight against the virus.

Anand Mahindra took to Twitter to share the development. He said, "Oxygen on wheels by @Mahindralog_MLL (Mahindra Logistics) goes live in Delhi. We’re rushing SOS oxygen cylinders to hospitals from the Rajghat & Mayapuri oxygen depots. Together we fight the second wave. Thanks to the local administration for the opportunity and their support."

He also said, "We’re scaling up operations in Delhi in the coming days as well as expanding reach to neighbouring centres. O2W is already operating at Pune, Chakan, Pimpri-Chinchwad, Nasik and Nagpur, delivering about 600 O2 cylinders every day with Bolero pickup trucks."

We’re scaling up operations in Delhi in the coming days as well as expanding reach to neighbouring centres. O2W is already operating at Pune, Chakan, Pimpri-Chinchwad, Nasik and Nagpur, delivering about 600 O2 cylinders every day with Bolero pickup trucks.(2/2) pic.twitter.com/6VF4q9gr6o

Earlier this week, Mahindra Logistics had rolled out the initiative in Maharashtra, the worst affected state by the pandemic. Mahindra converted more than a hundred Bolero pickup trucks to turn them into last mile delivery options to cater to those who need. The service is already catering to cities like Mumbai, Thane, Pune, Pimpri-Chinchwad, Chakan, Nasik and Nagpur.

Mahindra had assured that it will roll out the 'Oxygen on Wheels' initiative to different cities across the country, including Delhi, soon. The carmaker is also in talks with several governments and civic bodies to acquire necessary clearances to be able to do that.

India is currently facing one of the worst phases of the pandemic, with several hospitals complaining about shortage of oxygen. The second wave has sent cases soaring across the country. At least 382,315 new cases were recorded in India on Wednesday, the 14th straight day of more than 300,000 daily cases. As many as 3,780 patients also died within the last 24 hours, which is grim record of daily casualties in the country.

While announcing about this initiative last week, Anand Mahindra had said that transportation of oxygen from production facilities to hospitals and homes has been one of the key challenges. The initiative is an effort to bridge the gap with 'Oxygen on Wheels' initiative implemented by Mahindra Logistics.