Kolkata Police says no to bicycle lanes, turns down proposal

Arguing against the idea of bicycle lanes in Kolkata, the authority said dedicated lanes in some parts of the city may shrink road space and worsen the traffic situation.
By : PTI
| Updated on: 18 Sep 2020, 04:02 PM 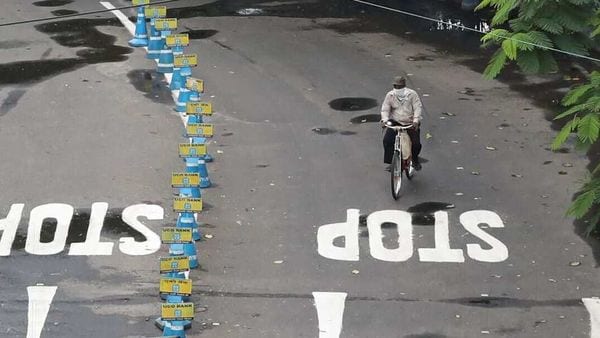 A man rides his bicycle on a deserted road in Kolkata. (File photo)

The Kolkata Traffic Police has turned down a proposal by the city's planning and development authority to set up dedicated bicycle lanes in the city, insisting that such corridors will eat up space on the "already-narrow roads" and affect vehicular movements.

A senior traffic police officer here said on Friday that the city's current infrastructure would not support dedicated bicycle lanes, and the plan won't be viable unless roads are "upgraded".

"Setting up bicycle lanes in the city is not possible, at this moment. The left lanes of city roads are meant for buses. If we build a cycle lane, it has to be on the extreme left. The buses, in turn, will be pushed to the middle of the road. Where will the passengers wait then?

"We already have a huge number of vehicles plying the streets, and the fleet keeps increasing each day, despite not much development in the city's infrastructure," he said.

Safety of commuters and uninterrupted traffic flow are of primary concern, the officer said.

"Hawkers encroach upon the city's pavements, forcing people to walk on the left side of the road. Add to that, there are parking zones for cars and bikes. Forget about bicycle lanes, there isn't much space for pedestrians to walk freely. If something happens to a pedestrian, the traffic police will be held responsible," the senior officer argued.

Notably, cycling is banned on at least 22 thoroughfares in the city. There are some arterial roads, however, such as the Central Avenue and the Rashbehari Avenue, where movement of the trusted two-wheeler is allowed between 11 pm and 7 am.

An official of the Kolkata Metropolitan Development Authority (KMDA) said the statutory body has received a reply from the traffic police, but did not divulge if any alternative plan was in the works.

"They (police) have given us a reason for turning down the proposal. Dedicated lanes in some parts of the city may shrink road space and worsen the traffic situation," the KMDA official said.

Incidentally, in June, the West Bengal Cabinet had approved a policy, allowing bicycles on select city roads to ease commutation woes, amid the COVID-19 pandemic.

Several people had cycled their way to their workplaces in the city and elsewhere, when the pandemic- induced lockdown was in place.