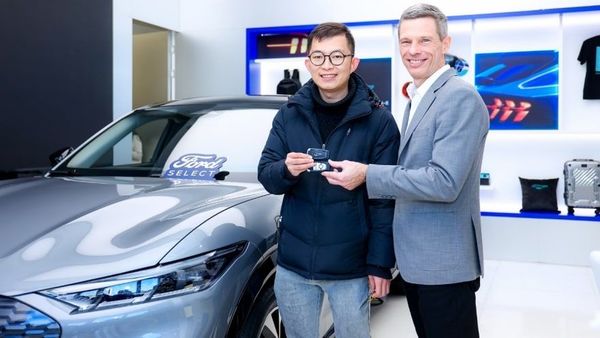 Ford Motor Company has officially delivered the first locally manufactured Mustang Mach-E electric car to a customer in China. The company released an image of the customer Jin Zhang, who is an ad executive and Mustang fan, receiving the vehicle. The general manager of Ford China BEV division Mark Kaufman can be seen handing over the keys to him.

The car maker manufactures Mustang Mach-E at Changan Ford’s manufacturing plant in Chongqing. The locally-produced Mach-E is being sold via the company's BEV division's network of direct-to-customer stores located across major Chinese metropolitan markets. Currently, Ford operates 25 such stores dedicated to the sale of its electric vehicles in the country.

As per images posted on social media by a user, Ford delivered multiple units of locally-made Mach-E to customers in the first batch of hand-outs. A delivery ceremony for China-made Mach-Es was held at Shanghai Hongqiao Tiandi.

Earlier in November, Ford sold over 3,000 Mustang Mach-E units in the US and also introduced an updated by unlocked more battery capacity for a bit higher range and improved the fast charging speed, a report by Insideevs stated. It added that Farley has advised the company to focus on the three first models - Mach-E, Ford F-150 Lightning and Ford E-Transit instead of adding more EVs to the portfolio. This, he said, will result in a much higher production rate of the Mach-E in the near term. The company has set a target of selling over 200,000 of these per year by 2023 in North America and Europe.

However, only time will tell how well does the Mustang Mach-E sell in China, one the most competitive EV markets in the world.