What made the 836 km range achievable on a single charge is not an oversized battery pack, but the EV manufacturer's in-house technology.
By : HT Auto Desk
| Updated on: 04 Oct 2021, 05:58 PM 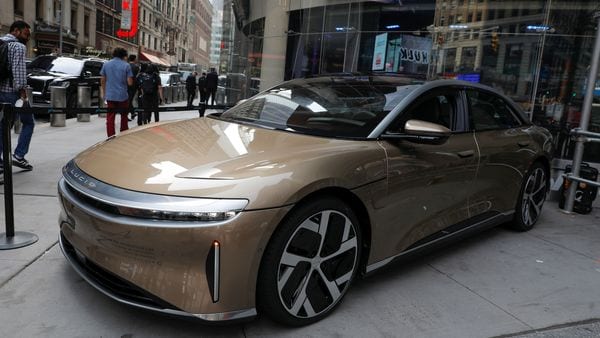 Lucid Air Dream Edition has been confirmed as the longest-range EV ever rated by the US Environmental Protection Agency.

However, despite achieving such a feat, Lucid CEO and CTO Peter Rawlinson is not so keen to point out this capability. As he said, this jaw-dropping number is not actually terribly important. However, he also mentioned, that this will be a new record for any electric vehicle.

The Lucid Air Dream Edition is priced at a whopping $169,000, much higher than the standard Lucid Air sedan that is available at a starting price of $74,000.

What made the 836 km range achievable on a single charge is not an oversized battery pack, but the Ev manufacturer's in-house technology, claims Rawlinson. He gave the credit to the race-proven 900V battery pack of the automaker that comes with BMS technology, miniatured drive units and Wunderbox technology ensuring an ultra-high efficiency.

The technology also claimed to be enabling the all-electric sedan to munch more kilometres without squeezing out a high amount of battery power. Pointing at this technology Lucid Motors CEO claimed that the next-generation electric vehicle technology has arrived.

Other elements that help the electric sedan to achieve this feat include a 1,111 hp generating electric powertrain and the car's clean-sheet design. The design has helped Lucid Air Dream Edition in achieving higher aerodynamic efficiency, which helps in minimising drag and consuming lesser battery power.