Mahindra Scorpio-N takes cue from Mahindra XUV700 and gets AndrenoX connected AI technology.
By : Shubhodeep Chakravarty
| Updated on: 13 Jun 2022, 09:02 PM
A look at the cabin layout of the upcoming Mahindra Scorpio-N.
View all Images

1/4
Mahindra has officially, and at long last, shared official images of its much-awaited Scorpio SUV which will be called Scorpio-N.

2/4
The latest Scorpio-N from Mahindra is completely overhauled in terms of its exterior design language and gets LED head light units, LED DRLs, a reworked front grille, more pronounced bumper and a reworked alloy design.

3/4
Mahindra has confirmed that Scorpio-N will also be offered with a 4x4 option.

4/4
While official cabin images have not yet been released, Mahindra has also confirmed that the SUV will be offered with petrol as well as diesel engine options, and with manual as well as automatic transmission choices.

Mahindra Scorpio-N is one of the most eagerly anticipated car launches in the Indian market of the calendar year and ahead of its June 27 showcase to the world, the full cabin layout and dashboard spread of Scorpio-N has now been revealed. The three-row Mahindra Scorpio-N will continue to be a three-row vehicle but is completely reworked from the outside and from within to set it apart from the Scorpio that has been available in the market here and one that will continue to be offered post Scorpio-N launch.

While Mahindra had officially revealed the exterior images of Scorpio-N last month, there has been much speculation about what prospective buyers can expect in the cabin. After the resounding success of Mahindra XUV700, many expected many of the features of that model to make way into Scorpio-N. And on expected lines, Mahindra has confirmed that Scorpio-N will also get the premium 3D sound system by Sony that was first seen inside the XUV700. The main infotainment screen will also be powered by AdrenoX that is also offered in the XUV700. 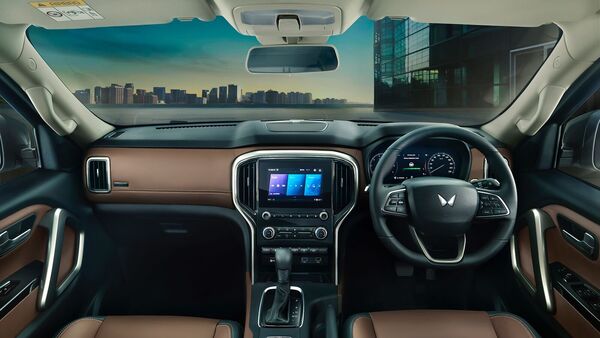 A look at the dashboard layout inside the new Mahindra Scorpio-N.

The dashboard layout has also been revealed with a dual-tone black and brown colour combination here as well as on the seats. The AC vents, as can be seen in the image above, are in vertical design while there is an all-digital driver display behind the steering wheel with mounted controls. The center console appears to have a simple yet functional design, complete with the gear shift knob and a dial which is most likely to select drive modes. 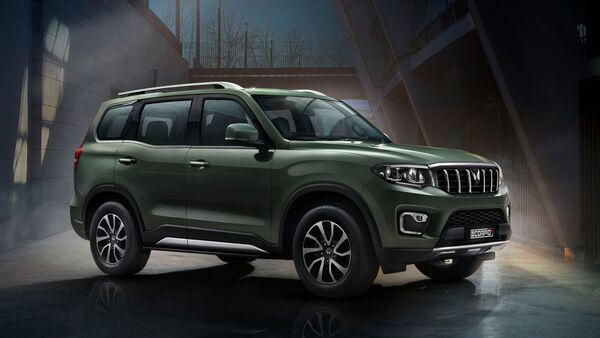 Mahindra has officially, and at long last, shared official images of its much-awaited Scorpio SUV which will be called Scorpio-N.

The Scorpio-N will be the second car from Mahindra to sport the company's new logo meant for its SUV lineup. Exterior images have already confirmed that the SUV will also feature dual LED projector units, dynamic turn indicators and - on obvious lines - will have 4x4 capabilities. The Mahindra Scorpio-N will come with both petrol as well as diesel engine options, as well as manual and automatic transmission choices. This is a successful mantra for Mahindra which has been offering twin engine and twin transmission choices on its newer models like the updated Thar and XUV700.