Honda Amaze: How it stacks up against Maruti Dzire, Hyundai Aura, Tata Tigor 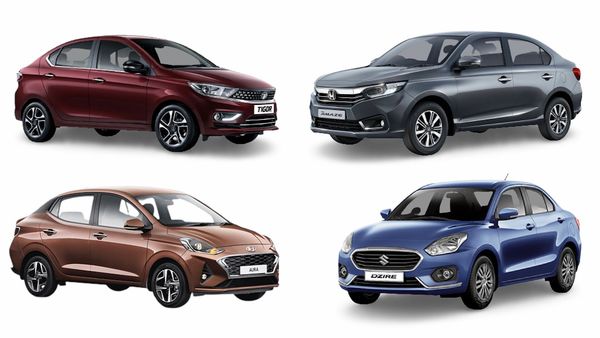 2021 Honda Amaze facelift (top right) was launched this week. It will take on rivals like Maruti Suzuki Dzire, Hyundai Aura and Tata Tigor in the sub-compact sedan segment in India.

Honda has launched the 2021 Amaze facelift sub-compact sedan in India on Wednesday. 2021 Honda Amaze facelift will be offered in three variants at a starting price of ₹6.32 lakh.

Honda Amaze was first launched way back in 2013. It received its first major facelift in 2016. The 2018 Honda Amaze facelift is closer to the model that has been launched now.

Honda Amaze remains one of the key players in the popular sub-compact sedan segment in India. It will take on rivals like Maruti Suzuki Dzire, Hyundai Aura, Tata Tigor in the segment.

Here is a look at how 2021 Honda Amaze facelift stacks up against its rivals in terms of price, specifications and features on offer.

Honda Amaze facelift, which is offered with both petrol and diesel engines, is offered at a starting price lower than all its key rivals. While the Amaze has a starting price of ₹6.32 lakh, Dzire costs ₹6.79 lakh for its base 1.2-litre petrol manual variant LXi, Aura comes at ₹6.89 lakh for the E variant and Tigor for ₹6.44 lakh for the XE variant with a similar 1.2-litre petrol manual. However, Honda Amaze costs more for its top-spec 1.5-litre diesel CVT variant called VX compared to the top-spec trims of its rivals. The reason is that none of its rivals offer such a powerful diesel engine with automatic transmission in this category.

The engines on offer on all these sub-compact sedans are mostly limited to 1.0-litre or 1.2-litre petrol or diesel engines. Honda has kept the faith in its 1.2-litre i-VTEC petrol and the 1.5-litre i-DTEC diesel engines for the Amaze facelift. The petrol engine is capable of churning out 88 bhp of power and 110 Nm of peak torque, while the diesel unit can produce 98 bhp of power and 200 Nm of peak torque. Both engines are mated to a 5-speed manual gearbox along with the option to choose a CVT automatic gearbox as well.