Lately, the auto sector has been suffering from a consumption slowdown due to high taxation, stagnant wages and a stressed rural sector.In terms of the calendar year, the 2019 sales decline is the worst ever in the last 20 years.
By : PTI
| Updated on: 04 Feb 2020, 03:59 PM 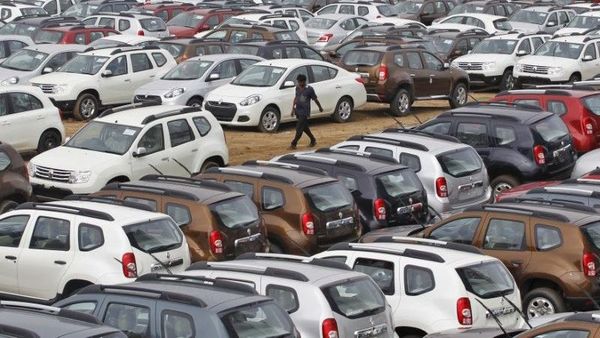 FILE PHOTO: A worker walks past parked Renault cars at its stockyard on the outskirts of Ahmedabad June 11, 2013. REUTERS/Amit Dave

Automobile industry on Saturday said the Budget 2020-21 lacked measures to revive the sector which has been going through a prolonged slowdown.

The industry, however, lauded the government’s initiative to increase customs duty on imported electric vehicles and said it would help in establishing local production of such products in the country.

"The Indian automobile industry was looking forward to some direct benefits in the budget, which could have helped in reviving demand in the context of the current slowdown and huge investments made by the industry for transition to BS 6 and from that aspect, the Budget speech was not what we were expecting," SIAM President Rajan Wadhera said in a statement. SIAM had made specific recommendations on steps that could have revived demand, like an incentive-based vehicle scrappage scheme; budget allocation for diesel buses procurement by STUs and zero customs duty for lithium-ion batteries, which do not seem to have been considered, he added. Automobile dealers' body FADA said the Budget lacked immediate demand boosters for the automobile industry. “It was disappointing that as part of auto ecosystem, no direct benefits for the automobile industry were announced. Budget allocation for an attractive incentive-based scrappage policy would have been a demand booster for commercial vehicles," FADA President Ashish Harsharaj Kale said.

Even though GST is not a part of the Budget, an indication about rationalisation of rates for automobiles would have brought much respite for the industry, he added. Auto component body ACMA, however, expressed satisfaction on the measures announced in the Budget especially the focus on development of rural economy, manufacturing and infrastructure. "We are glad that the government has announced a ₹1,000 crore handholding scheme for mid-sized companies including those in the auto components to give a thrust to export development, R&D and technology upgradation," ACMA President Deepak Jain said. Supporting hike in customs duty on imported electric vehicles, Tata Motors President Electric Mobility Business Shailesh Chandra said 'Make in India' has been the priority of the government for greater value addition and employment generation in the country. “The proposed hike in SKD/ CKD forms of passenger EVs is consistent to the 'Make in India' approach and encourages progressive localisation of electric vehicles in the country," he said. This will drive the efforts of OEMs more towards local operations and ensure greater commitment to electrification in the country, Chandra added. Echoing the sentiment, Wadhera said the increase in customs duty for CKDs and SKDs of electric vehicles and CBUs of commercial vehicles were positive steps for Make in India initiative.

All of these will help the auto industry, he added.

"We also hope the GST Council will look at lower taxation of products like cars which have a multiplier effect on jobs in the economy; the resultant economic growth will more than compensate for the lower tax rates," Ayukawa noted.

Similarly, Mahindra & Mahindra Managing Director Pawan Goenka said the structural changes, in the way things are being done, may not be enough to have an impact tomorrow, but will definitely give strong impetus to the economy in the long run.

Nissan Motor India Managing Director Rakesh Srivastava said capital infusion in PSU banks and tax reforms will encourage more liquidity in the marketplace. "The Budget’s push on boosting infrastructure and aiding the rural economy will help to counter the auto slow down," he said on Twitter.

EY Tax Leader, Automotive Practice Pramod Achuthan termed the Budget a mixed bag for the automobile sector. “Higher allocation for infrastructure are positive for the industry...the scheme to boost electronic manufacturing along with higher customs duty on imports of electrical vehicles and parts should incentivise domestic electric vehicle industry. Lack of directional guidance on GST rate cut or cess reduction disappointing," he noted.