Labor shortages are adding to the woes of an industry that already was struggling to make cars due to semiconductor constraints.The UK auto industry’s first-half output was down 38% from the trailing five-year average.
By :
| Updated on: 29 Jul 2021, 09:27 AM 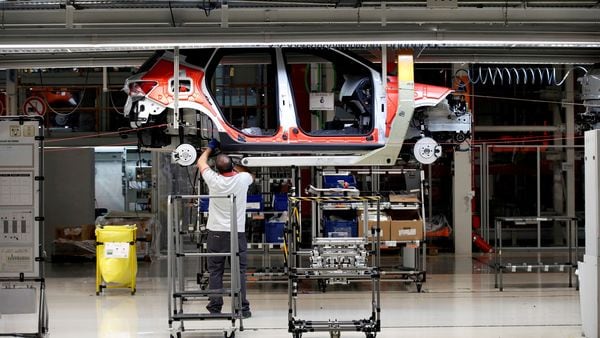 FILE PHOTO: Workers assemble vehicles on the assembly line of a car factory. (Photo used for representational purpose only)

Carmakers in the UK urged Prime Minister Boris Johnson to make their workers exempt from quarantines as coronavirus self-isolation rules contribute to severe labor shortages that are hampering production.

Automakers in the country produced 69,097 cars in June - the second-worst total for the month since 1953 - as the global chip shortage and staffing snafus weighed on production, the Society of Motor Manufacturers and Traders said Thursday. The industry’s first-half output was down 38% from the trailing five-year average.

The SMMT asked the UK to exempt vaccinated workers at car plants from having to stay at home after being “pinged" by the National Health Service’s Covid-19 tracing app amid a new wave of infections. The trade group’s appeal follows multiple reports warning of the potential for severe blows to the economy just after the government lifted Covid-19 restrictions.

“The industry still faces headwinds most notably from global semiconductor shortages and staff absenteeism as a result of staff being ‘pinged,’" Mike Hawes, the chief executive officer of SMMT, said in a press briefing. The group expects supply chain uncertainty to last into 2022.

Labor shortages are adding to the woes of an industry that already was struggling to make cars due to semiconductor constraints. Jaguar Land Rover, one of the UK’s largest automakers, said this week production in the quarter through September could be 50% lower than it had previously planned due to the dearth of chips.