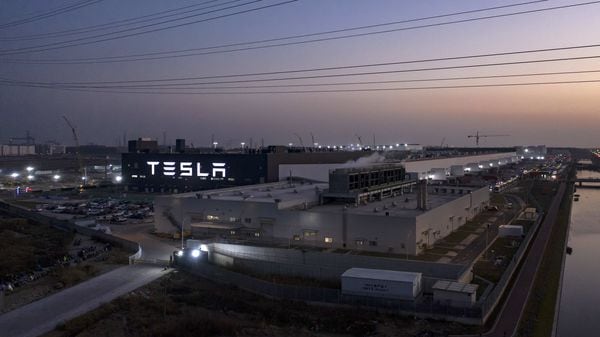 The Tesla Inc. Gigafactory in this aerial photograph taken in Shanghai, China, on Friday, Dec. 25, 2020. Tesla is coming to the end of its first year selling China-made cars with a commanding position in the world's biggest electric-vehicle market, but Elon Musk shouldn't rest on his laurels. Photographer: Qilai Shen/Bloomberg

Tesla Inc. came within a hair of meeting its 500,000-vehicle goal for 2020, setting the stage for a new year in which it’s expanding in China and poised to open new factories in Texas and Germany.

The electric-car maker said Jan. 2 it delivered 180,570 vehicles in the year’s final three months, the most for any quarter ever but falling just 450 vehicles shy of the half-million mark Chief Executive Officer Elon Musk had set for the entire year. Tesla has been ramping up output of its mass market models to meet rising global demand for battery-powered cars, with 2020’s total jumping 36% from the prior year.

“The good news is Tesla has the formula consumers want," Gene Munster, managing partner at Loup Ventures, wrote in a note to clients. “The bad news is to keep up with this demand, the company needs to quickly build new factories in Austin, Texas, and Brandenburg, Germany. While they made it look easy in Shanghai, ramping production is difficult and will be one of the most important Tesla topics in 2021."

The result capped a remarkable year for Musk and his company, which joined the Standard & Poor’s 500 Index on Dec. 21 after posting five consecutive quarters of profit. Tesla’s shares rallied 743% in 2020, giving it a $668.9 billion stock-market capitalization. Musk -- who ended the year as the world’s second-richest person -- took to Twitter to praise his team, and noting that in its earliest days he thought the carmaker had only a 10% chance of even surviving.

The quarterly delivery figure is widely seen as a barometer of demand for both Tesla’s vehicles and consumer interest in electric vehicles worldwide. The company said in a statement on Saturday its delivery count should be viewed as slightly conservative and final numbers could vary by up to 0.5% or more.

“Musk & Co. basically hitting its 500k goal for the year is a major feather in the cap for the company and the bulls as Tesla saw robust Model 3 demand over the last 10 months despite the hurricane-like consumer headwinds seen globally" because of the Covid-19 pandemic, Wedbush analyst Daniel Ives wrote in a note after the results.

Tesla had predicted in January 2020 -- before the onset of the coronavirus pandemic -- it would “comfortably exceed" sales of half a million cars. The company said in October that it still expected to meet that target despite a temporary shutdown of its factories in the spring, and Musk signaled it was well within reach in a internal email sent to employees in December and viewed by Bloomberg.

Analysts also predicted Tesla would meet its sales goal for the year, which further buoyed the company’s shares in the waning days of 2020. The surge occurred despite multiple share offerings.

The company undershot the 181,000-vehicle threshold it needed to clear in the most recent quarter, a 30% jump over the July-September period. The push largely depended on increased output from its Chinese plant and higher output in the U.S. of the newest car in its lineup: the Model Y.

“Tesla’s miss of a 500,000 delivery goal for 2020 indicates the automaker is still struggling to scale up, as the eighth year of mass-market pursuit still leaves the company about the size of Isuzu globally, even as it eclipses the combined market cap of 10 automakers that deliver more than 50 million units annually. Tesla faces compressing margins as the focus shifts to China and sales by competitors mute the profit contribution of regulatory credits initially, then threaten market share."

While Tesla is the clear global market leader, its vehicle deliveries are tiny compared to the millions of gasoline-powered cars and trucks sold by established automakers such as General Motors Co. and Volkswagen AG. Those two carmakers and others are preparing to flood the nascent EV market with dozens of battery-powered models over the next five years.

To capitalize on its head start, Tesla is building two new vehicle assembly operations -- the one outside Berlin that could eventually assemble as many as 500,000 cars annually, and the one in Texas that will make the brand’s first pickup. Both are expected to start production later this year, joining its existing vehicle-assembly facilities in Fremont, California, and Shanghai.

Once known for niche luxury models such as its S sedan and X sport utility vehicle, Tesla has broadened its appeal with the 3 and Y models priced to start below $50,000. Musk said in September that he plans to start sales of a cheaper $25,000 Tesla by 2023.

As usual, Tesla delivered many cars during the quarter’s final days. Musk added an incentive to buyers in the final three days of the year, saying in a tweet that they would get three months of an optional driver-assistance tool Tesla calls Full Self-Driving.

Danielle Watson, a 31-year-old pharmacist, tweeted on Dec. 28 that she had just taken delivery of a Model Y. In a private message, the Greenville, South Carolina, resident said she took delivery in Charlotte, North Carolina -- a sign the lure of Tesla’s brand power in the U.S. is growing well beyond its home state of California.