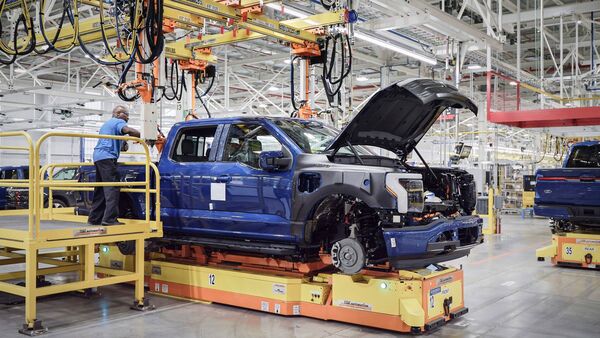 Ford has started full production of its F-150 Lightning pickup truck at its high-tech Rouge Electric Vehicle Center located within its historic Rouge Complex. It marks a historic milestone for the company as its popular F-Series goes electric. The Ford F-Series has been the US' best-selling truck for 45 years in a row and is second only to the iPhone in revenue among all American consumer products, as per a 2020 study.

The demand for the F-150 Lightning has been unprecedented with 200,000 reservations and the company is ramping up production to a planned annual run rate of 150,000 in 2023. It has geared up a new part of its Rouge manufacturing complex to build 150,000 of the heavily modified version of its best-selling F-150 pickup truck annually.

The company has invested a total of $950 million and created 750 jobs at the Rouge Electric Vehicle Center. The automaker had planned to build just 40,000 Lightning trucks annually, but surging demand for electric vehicles prompted it to increase planned production twice since last August.

Ford is gearing up to deliver more than two million electric vehicles annually by 2026, equal to about one-third of the company’s global volume, on the way to 50% by 2030.

The full-size Ford F-150 Lightning pickup provides 400 liters of cargo, gets 2.4 kW of exportable power, combined with the power available from the 5.5-foot bed and cab, it brings the truck’s Pro Power Onboard total to up to 9.6 kW from 11 power points.