Alfa Romeo Giulia Quadrifoglio is considered the fastest mass-produced five-seater vehicle in the world whereas Stelvio Quadrifoglio is currently the world record holder for the fastest SUV lap to cover the Nurburgring circuit.Dubai Police will deploy the vehicles in key tourist areas.
By : HT Auto Desk
| Updated on: 20 Oct 2021, 04:21 PM 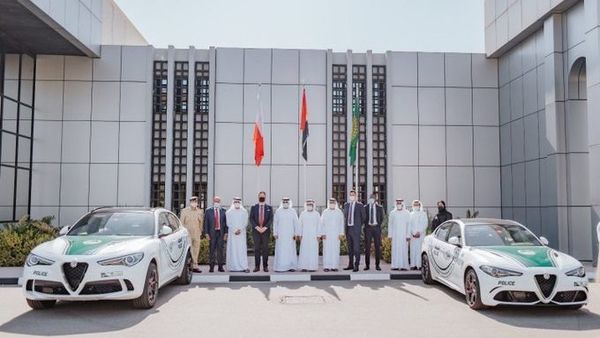 Dubai Police has the most expensive garage, guns down! Known for a collection of vehicles that are both ultra expensive as well as ultra fast, crime fighting on wheels in Dubai just got even more fast and furious with the addition of two Alfa Romeo models recently. The Giulia Quadrifoglio and Stelvio Quadrifoglio from the luxury automaker may not be the most expensive in its new home but there is just no denying that these further up the hot wheels quotient of the Dubai Police force.

Alfa Romeo's Giulia Quadrifoglio is considered the fastest mass-produced five-seater vehicle in the world whereas Stelvio Quadrifoglio is currently the world record holder for the fastest SUV lap to cover the Nürburgring circuit. Both the cars sport V6 engines which can create a power output of 510 horsepower. These cars can also zip to the speed of 100 kmph from zero under 3.9 seconds. In addition to that, these cars feature carbon fibre roofs that give them useful lightness. These also come with an active aero front splitter that will help the user to optimize downforce support to increase the vehicles’ driving agility.

Brigadier Jamal Al Jallaf, director of the General Department of Criminal Investigation (CID) at Dubai Police shared that adding these premium cars to the fleet will help police officers to elevate their presence in the key tourist destinations. It will also help maintain the much-needed safety and security, he added.

Colonel Dr Mubarak Saeed Salim Bin Nawas Al Ketbi, director of Dubai Tourist Police at CID shared that this latest addition brings up the number of luxury vehicles in the fleet to 31. “In addition, Alfa Romeo’s Giulia Quadrifoglio and Stelvio Quadrifoglio vehicles will be present in key touristic areas, assisting police officers in providing a number of services — from counselling and information provision, amongst other police services to tourists and the public — further highlighting Dubai Police’s role in social responsibility," he stated.

Earlier it has been reported that the Dubai Police also added a 2021 Genesis GV80 SUV. Genesis is the luxury brand of Hyundai.