The DelhiMumbai Expressway is a proposed 1,250-km long controlled-access highway connecting the national capital with the commercial capital of the country.Gadkari said he had instructed officials concerned, contractors and local civic bodies to complete the work during the next one year.
By : PTI
| Updated on: 13 Feb 2021, 17:44 PM 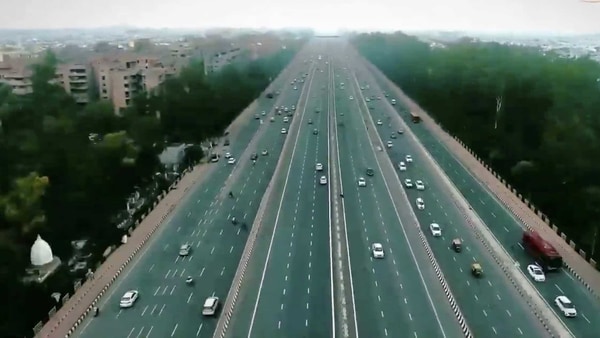 Once completed, the Delhi-Mumbai Expressway will ease the current traffic load on the Pune-Mumbai Expressway, Union Transport Minister Nitin Gadkari said on Saturday after reviewing various road projects in Pune and western Maharashtra.

Addressing a press conference after inspecting the under-construction multi-level flyover project at Chandni Chowk in Pune, Gadkari said he had instructed officials concerned, contractors and local civic bodies to prepare a plan to ensure that the work gets completed during the next one year.

The BJP MP also reiterated that motorists would have to pay road tax if they need "good services".

"The Delhi-Mumbai Expressway work is going on. (Once completed), it will ease the traffic load on Pune-Mumbai Expressway as a bulk of traffic between northern and southern states currently pass through the Mumbai-Pune expressway," he told reporters.

The DelhiMumbai Expressway is a proposed 1,250-km long controlled-access highway connecting the national capital with the commercial capital of the country.

Gadkari said the main reason behind heavy traffic on the Pune-Mumbai expressway is that vehicles coming from northern states pass through this highway to travel further towards southern states.

"But the proposed 12-lane Delhi-Mumbai Expressway will ease the traffic congestion on Mumbai-Pune expressway and other westerly highways," he said.

"This will ease the traffic load on Pune-Mumbai Expressway and other highways, and also bring down vehicular pollution," he added.

Talking about the development and four-laning of the route from Pune that is used for walking palkhis or palaquins of Sant Dnyaneshwar and Sant Tukaram by devotees of Lord Vitthal, Gadkari said the work was going on at high speed.

"Since the project is close to my heart, I think that beautification of the route should be done with the help of putting the couplets from 'abhangs' and songs devoted to Lord Vitthal along this route," he said.

He said devotees can also suggest some ideas which can be implemented for beautifying the palkhi road.

After inspecting the work of the multi-level flyover project at Chandni Chowk, Gadkari said, "I was told that the deadline to complete this project is 2023, but looking at the hardships and inconvenience caused to the public due to the ongoing work, it is not feasible to wait till 2023".

"I have asked all officials concerned and contractors to prepare a plan to complete the project in the next one year," he added.

He said the modalities regarding the acquisition of land for the flyover project stood completed and efforts will be made to complete the project at the earliest.

Gadkari said Axis Bank, which was the financier for the project, has violated norms.

"What this bank used to do is that it used to get the money collected in the form of toll (and) deposited it in its own account. Due to this, the concerned contractor did not get funds to finish the work. I requested the bank to hand over the funds to the contractors but it did not relent. The bank actually betrayed.... It violated the norms for the (flyover) project.

"It is because of the actions of Axis Bank, that the common people got inconvenienced as the contractor could not complete the work," said Gadkari.

He said he had written to Pune rural police and Pune collector that because of the bank's action, the contractor is not getting money and the work is getting delayed.

The National Highway Authority of India (NHAI) is now giving money to contractors to complete the flyover work, he said.

When asked about the people's reluctance to pay the toll in cases where road works are pending completion, Gadkari said the road tax has to be paid if people want good services.

"The way Chandrakant Patil (when he was PWD minister in the previous BJP-led government in Maharashtra) waived the toll, we won't do it," he quipped.

Patil was also present when Gadkari referred to him.

Gadkari said the work of Katraj flyover near Pune will be started in the next one month.