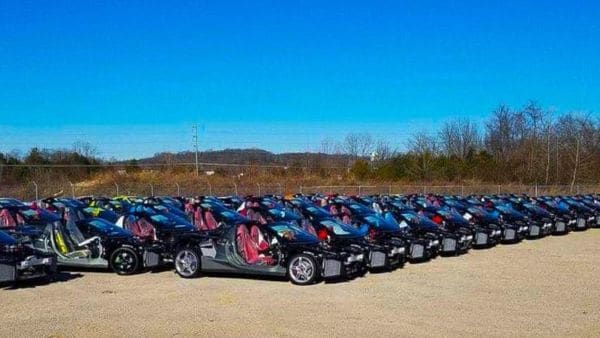 This image of new but damaged Chevrolet C8 Corvette units was shared on Facebook by Kornel J Werner.

A tornado in Kentucky earlier this month caused widespread destruction to property and one of the saddest sights, perhaps, was around 120 Chevrolet Corvette units heavily damaged at the company plant in Bowling Green. It has now been ascertained that such was the extent of damage that these vehicles are beyond the scope of salvage and will have to meet their untimely death under a crusher.

A social media post with images showing the damaged Chevrolet C8 Corvette units awaiting a sorry end was shared. It is clear from the images shared that the units were fresh off the production lines and may have been ready to be shipped to customers, clear from the fact that even the seat cover packaging is still on.

Reports suggest that while initial estimates of 120 units being damaged was made, the eventual numbers could see an increased figure.

General Motors had previously confirmed that their Bowling Green-based production plant and the Corvette Museum have been severely impacted by the tornado. High-speed winds, it is reported, resulted in a fire that started on the factory roof due to a ruptured fuel line. Water also entered the factory and it affected the models that were in the middle of the production. The water has impacted the exposed interiors and electronics of the models.