Home Auto News Cost Of Evs To Be At Par With Petrol, Diesel Vehicles In Two Years: Gadkari

Cost of EVs to be at par with petrol, diesel vehicles in two years: Gadkari

Union Minister Nitin Gadkari has said that the cost of running an electric vehicle will be ten times lesser than the vehicles running on fossil fuel.
By : HT Auto Desk
| Updated on: 23 Mar 2022, 08:36 AM 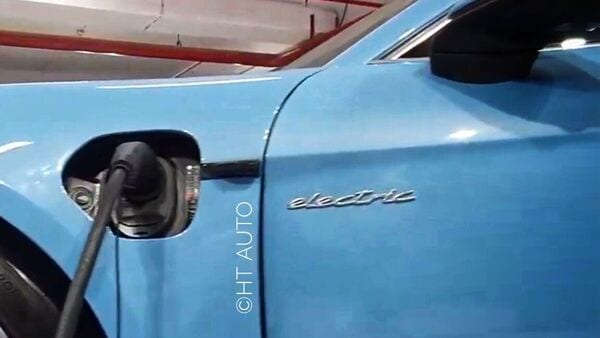 "I can say within maximum two years, the cost of electric scooter, car, auto-rickshaw will be same as petrol-driven scooter, car, auto-rickshaw. Prices of lithium-ion battery are coming down. We are developing this chemistry of zinc-ion, aluminium-ion, sodium-ion batteries. If petrol, you are spending ₹100, then on electric vehicle you will spend ₹10 (for using)," Gadkari said.

Gadkari made this remarks in the Lok Sabha on Tuesday. The Union Minister for Road Transport and Highways emphasised the need to shift to cost-effective indigenous fuel and hoped that this will soon reduce pollution levels in places like Delhi.

(Also read: Petrol, diesel prices hiked for second straight day. Here is how much they now cost in your cities)

Gadkari also urged MPs to adopt hydrogen technologies for transport. He said that hydrogen will soon be the cheapest fuel alternative. Earlier this month, Gadkari launched India's first green hydrogen-based advanced fuel cell electric vehicle (FCEV), Toyota Mirai. He said this is the first-of-its-kind project in India that aims to create an ecosystem for such vehicles in the country.

Gadkari had earlier said that the cost efficiency of an EV compared to an ICE vehicle. He said that a customer will choose an EV if the car and a petrol car with similar cost will see massive difference in ownership cost due to fuel used.

Gadkari also dismissed concerns over lack of EV charging infrastructure in India. "I never understand this (issue of shortage of EV charging infra). There is lot of discussion...NHAI is making 650 charging stations. Every 40 km (on highway) with roadside amenities."

Gadkari also said that rising cost of EV batteries is a concern. "Presently lithium ion is a big challenge. We don't have lithium ion. About 81 per cent batteries we manufacture here in India. Now lithium ion is available in the world. Government is in the process to acquire some mines," he said.