The turnaround in the passenger vehicle segment was, however, the only exception in the domestic automobile industry where all other segments recorded weaker sales last month.
By : Malyaban Ghosh
| Updated on: 12 Nov 2019, 02:55 AM 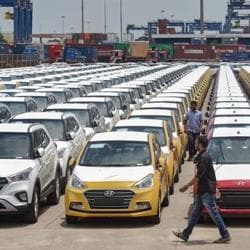 A total of 285,027 passenger vehicles were sold in the festival month of October

India's passenger vehicle industry barely managed to turn the corner in October after nearly a year of weak sales, buoyed by roaring demand for sport-utility vehicles and hefty discounts on several models.

Though marginal, the 0.28% growth in sales in October has raised a glimmer of hope that the world's fourth-largest automobile market will sustain its growth momentum amid steps taken by the federal government to boost consumer confidence and improve market sentiment.

The turnaround in the passenger vehicle segment was, however, the only exception in the domestic automobile industry where all other segments recorded weaker sales last month.

A total of 285,027 passenger vehicles were sold in the festival month of October, thanks to higher sales by market leader Maruti Suzuki India Ltd and new entrants Kia Motors India and MG Motor India.

"Retails of vehicles during the festive season this year were better than last year. We wish it continues in November as well and the industry comes out of the slowdown. There is a little positivity in the market now and new players are adding to the growth," said Rajan Wadhera, president, Society of Indian Automobile Manufacturers (Siam).

Sales in the segment have stayed in the negative territory since October last year since banks tightened credit norms to tackle the menace of rising bad loans after the bankruptcy of Infrastructure Leasing and Financial Services Ltd. This led to a cash crunch for non-banking financial companies impacting their lending to the auto industry. Volatile fuel prices and damped economic sentiment also added to the woes of potential automobile consumers.

Automobile sales in India are measured as factory dispatches and not retail sales.

Maruti Suzuki reported a 2.5% increase in sales to 141,550 vehicles in October. Kia Motors, part of Hyundai Motor Group, sold 12,859 units of its Seltos SUV model while MG Motor sold 3,536 units of Hector during the month.

Hyundai and Mahindra and Mahindra also pushed their respective compact SUVs— Venue and XUV300—during the festive month besides other car and SUV models.

Stronger retail sales have reduced inventory for most passenger vehicle makers to less than one month, Wadhera said, adding the companies no longer share concerns of inventory build-up at dealerships.

"This year, sales in November and December should be better than last year. Utility vehicle growth is largely coming from new models and not driven by extraordinary level of discounts," he said. To be sure, the commercial vehicle and two-wheeler segments continued to languish with each suffering a double-digit decline in sales in October, reflecting the current economic slowdown.