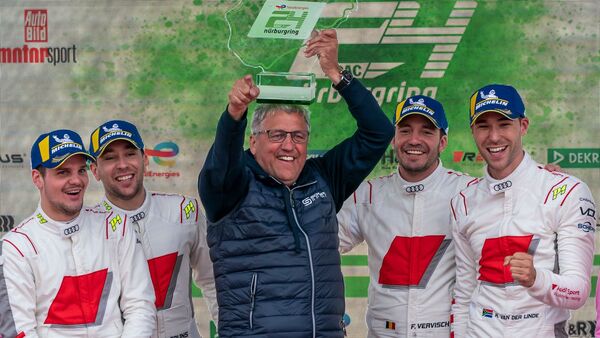 This year's 24-hour race was a sprint race and the winning car covered the total distance of 159 laps.

Audi has won the 50th edition of the 24-hour race at the Nurburgring. The carmaker achieved the top position in the endurance race with the Audi R8 LMS from Audi Sport Team Phoenix. This is the sixth overall victory of the team in this race in the last 10 years. The company stated that four Audi R8 LMS in the top 10 showcased the strong team performance. Chris Reinke, Head of Audi Sport customer racing congratulated the team on its victory. The endurance race at Nurburgring was witnessed by 2,30,000 spectators.

This year's 24-hour race was a sprint race and the winning car covered the total distance of 159 laps. Audi shared that the four teammates began the race from the 22nd position on the grid and successfully avoided major slip-ups during the entire time of the race.

The tracks also received heavy rain in the middle of the race followed by the team's decision to change the tyres of the cars. The Phoenix squad which was led by Ernst Moser won the race for the fourth time with the premium carmaker. Reinke said, “This victory has a special meaning because strong nerves were required in the changing conditions, especially during the final hours – from the drivers on the track, as well as from the mechanics, engineers and strategists in the pits."

Two Audi R8 LMS managed to get into the overall top 10 list. The one driven by Michele Beretta, Kuba Giermaziak, Kim-Luis Schramm and Markus Winkelhock from Scherer Sport Team Phoenix gained fifth position while the car with number 24 from the Lionspeed by Car Collection Motorsport team finished at sixth position. Audi also informed that one Audi RS 3 LMS from the Max Kruse Racing team retired after an accident.