The Delhi-Meerut Expressway, which has been operational from April 1, has been developed as a Smart Expressway in which commuters will get information on climate, traffic and even information on accidents at different locations.
By : HT Auto Desk
| Updated on: 03 Apr 2021, 12:43 PM 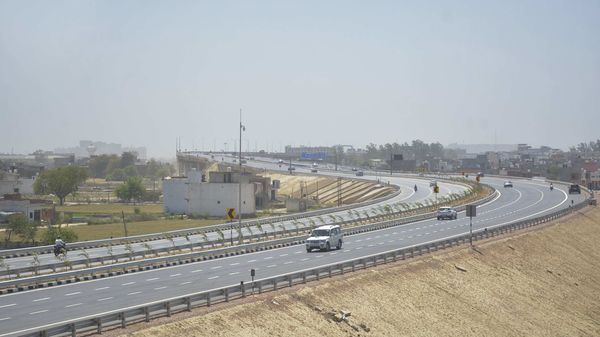 A view of the Delhi-Meerut Expressway (DME) which has been operational since April 1.

Mahindra Group Chairman Anand Mahindra has showered praise on Union Minister Nitin Gadkari's efforts to throw open the Delhi-Meerut Expressway. The highway connecting to the two cities was formally thrown open for use from April 1.

The first phase of the Delhi-Meerut Expressway project was inaugurated by Prime Minister Narendra Modi three years ago in May 2018. The 82-km-long Delhi-Meerut expressway consists 60 kms of expressway and 22 kms of national highway. It will also reduce the travel time of commuters from Muzaffarnagar, Saharanpur, Haridwar and Dehradun to Delhi.

2.5 hours to 45 minutes?? I remember doing this trip as a kid. Just a small dusty road then. Tells me how much transportation inefficiency we’ve been enduring so far. These highways will not just add percentage points to our GDP growth but also knit India together. Bravo! https://t.co/Zbbrf34HeE

Replying to the Union Minister's tweet which also shows a video on development of the expressway, Anand Mahindra congratulated Gadkari by saying, "2.5 hours to 45 minutes?? I remember doing this trip as a kid. Just a small dusty road then. Tells me how much transportation inefficiency we’ve been enduring so far. These highways will not just add percentage points to our GDP growth but also knit India together. Bravo!"

The Delhi-Meerut Expressway has four separate phases starting from Nizamuddin Bridge to UP Border. The second phase covers distance between UP Border and Dasna, the third phase falls between Dasna and Hapur while the final phase connects Hapur and Meerut. For easy access to different places, the expressway is littered with entry and exit points like at Akshardham, Dundahera, Sarai Kale Khan, Dasna, Indrapuram and Noida.

The Ministry of Road, Transport and Highways has put security as one of the top priorities for the Delhi-Meerut Expressway. It has installed more than 4,500 lights and cameras across the length of the 82-km long expressway to ensure safety of commuters.

The expressway also boasts of a special Emergency Call Box (ECB) that will help reach out to commuters who require emergency services on road in minimum time. The expressway will have facilities like ambulance, crane, petrol pump, restaurants, maintenance of vehicles shops for the convenience of commuting vehicles.