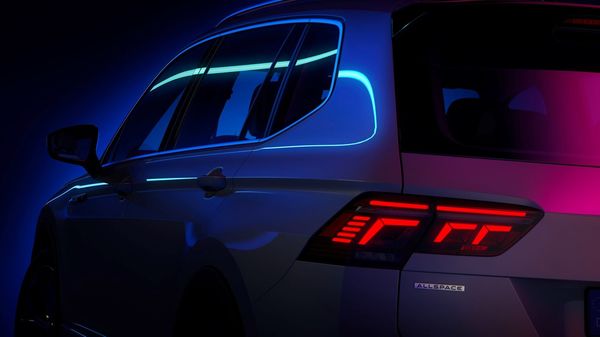 Volkswagen Tiguan Allspace facelift will be launched on May 12.

Volkswagen had launched the Tiguan AllSpace SUV in India at an introductory price of ₹33.12 lakh. The SUV on sale in India is powered by a 2-litre petrol engine, mated to a seven-speed DSG auto unit, which can churn out 190 hp of power. It also has 4MOTION All Wheel Drive system.

The facelift verison of the Tiguan Allspace was recently teased by the German carmaker. It is expected to be loaded with advanced technical features as well as a few design tweaks.

Design changes: The 2021 Volkswagen Tiguan Allspace luxury SUV is expected to get a larger grille, LED headlamps with DRL, new chrome lines running across the length of the grille, revised rear doors with redesigned lights. as suggested byt the teaser image shared by Volkswagen earlier, the Tiguan badging will now be centrally positioned and a new 4Motion badge will also appear at the rear.

New light technology: The new Tiguan Allspace may get Volkswagen's new LED headlights with IQ. Light technology. The same feature will be available in the upcoming facelift version of the Tiguan SUV as well. The technology used in the headlights has an intelligent LED Matrix with advanced light control module. It can help use different light modes for different situations, like dynamic headlight range control, dynamic cornering lights, poor weather lights, LED headlamps & DRL and LED cornering lights.

Technical upgrades: The 2021 Tiguan Allspace is likely to be powered by the same engine as seen in the preceding models. But there will be some added driver assist features that will make its way into the new version. Volkswagen is likely to introduce features like Travel Assist, which supports partly automated driving using the adaptive cruise control and lane keep assist functions.

More easy accesses: The new Tiguan Allspace SUV will also get a revised system for the hands-free opening of the boot lid. It opens up to a massive boot space of 1,920 litres. With all three rows up, there's 230 litres of luggage space. The last two rows of the three-row SUV can be folded down to create more space that can easily fit in bicycles, or large cargo in case shifting base.