Home Auto Cars News Is This The Genesis Gv70e All Electric Suv? Wait Till April 19 To Know More

Is this the Genesis GV70e all-electric SUV? Wait till April 19 to know more 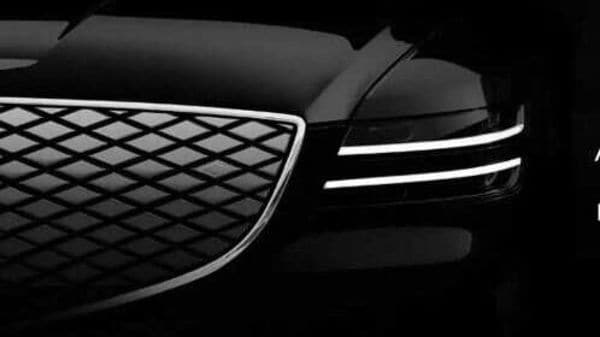 The front grille and the headlamp looks very similar to what the GV70e test mules had been spotted with.

Luxury car brand Genesis previewed its future design direction by showing the world the X Concept and as it appears, the automaker is ready to unveil another car this month, which could be the GV70e all electric SUV. The carmaker has teased the car in a single black and white image saying that it will be up for world premiere on April 19 at the upcoming Shanghai Auto Show in China.

The teaser image doesn’t reveal much, but it shows a part of the front grille and sleek LED headlights and LED daytime running lights. The front grille pattern looks very similar to the grille design of the electric GV70, which was spied earlier in 2021. The headlights too match in shape. However, the automaker is yet to confirm that the teased car is GV70e.

The GV70e all-electric SUV is unlikely to be underpinned by Hyundai’s new Electric-Global Modular Platform, which will house many future electric models from Hyundai, Kia, and Genesis. The GV70e will be based on the same architecture of the outgoing GV70 SUV. In that case, the internal combustion engine will be replaced with an all-electric powertrain.

The smaller GV60 model will be based on a new platform though. Also, it will share several technologies with Hyundai Ioniq 5 and Kia EV6.

Apart from the GV70e and the smaller GV60, the luxury car brand owned by Hyundai group is also working on electric variant of the G80. The test mules of this electric car have been already spotted couple of times.

As the world of automobiles is shifting its focus towards the zero emission all electric cars amidst the increasing ban on internal combustion engines and growing emission norms, several automakers are attempting to grab a chunk of the EV market. Hyundai being one of the major global players doesn't want to stay behind and all the three bands under the umbrella are working towards the goal.