Home Auto Cars News Ps In A Car? Gm Re Imagines Future With Consoles Installed In Self Drive

PS in a car? GM re-imagines future with consoles installed in self-drive 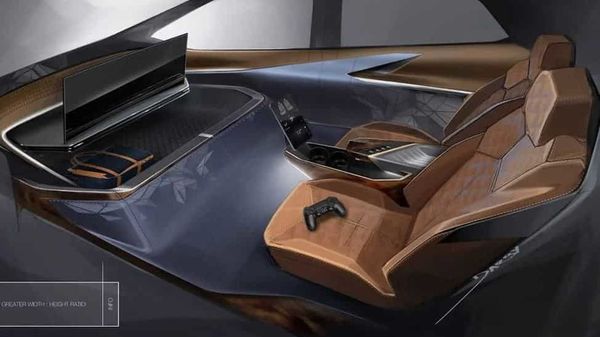 Being an autonomous car, there is no need of steering wheels and pedals. (GeneralMotorsDesign)

General Motors has imagined the interior of a future car with a built-in gaming console that lets the occupant indulge in gaming, while the car’s self-driving technology drives the vehicle. Autonomous vehicles are claimed to be bringing a lot of changes in terms of car design, automotive technology, driving habits that the current world is used to. The new General Motors design sketch by an independent designer gives a sneak peek of what could be a future autonomous car’s cabin look like.

As the design sketch has been posted online, it shows a large uplifted dashtop screen at the centre console which would act as an infotainment system as well for the car. There is a gaming controller through which the occupant would be able to play the game. Below that is a wide deck that appears to be a storage space for keeping items like a laptop bag or a laptop.

The cabin shows a two-seater configuration with plush seats wrapped in brown leather. For operating various vehicle functions, there is a small tab-like tilted screen positioned at the tip of the armrest between the two seats along with two cups/bottle holders. The cabin also indicates that there will be plenty of legroom for the occupants offering a comfortable experience. Expect ambient LED lighting and high-quality upholstery materials as well.

The fully autonomous cars won’t need a steering wheel or pedals for maneuvering. This gives the car designers freedom to think differently and add more zing to the cabins. The autonomous cars would come as more luxurious and feature-packed than the contemporary models available in the market currently.

Talking about the large touchscreen infotainment systems, automakers are already adding them in their respective vehicles. For example, Tesla and Volvo cars come with large screens at the centre console. Tesla has added gaming functions to its models already.