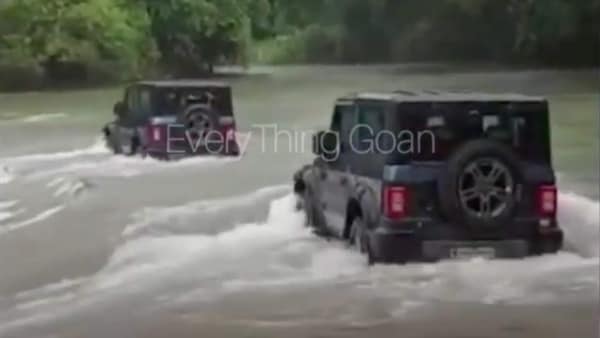 The Mahindra Thar has been an extremely capable vehicle on Indian roads for many years and the latest Thar backs its off-road skills with stylish looks, relatively comfortable cabin and an exhaustive feature list. Of course, its 4x4 abilities still makes the Thar a perfect SUV for adventurists but every machine has its possible limits. Anand Mahindra recently took to Twitter to share a series a video clip showing Thar SUVs crossing a fast-flowing river stream, and had a word of caution for those behind the wheel.

In the video clip, the Mahindra Thar units can be seen wading through treacherously wet conditions. The video reportedly shows a fast-flowing Dudhsagar river near Collem in Goa. Both Thar units manage to slowly but surely cross the river despite the force of the water current. Those around the person making the video can even be heard encouraging the drivers and heaping praise on them. It is not clear when the video was filmed.

Mahindra chose to share the video clip and while he underlined the capability of the Thar SUVs, also highlighted why such drives need to be avoided. “Found this post in my inbox this morning. While I appreciate their faith in the Thar, this looks like an incredibly dangerous manoeuvre," he wrote on the micro-blogging platform. “I appeal to Thar owners to exercise restraint."

Found this post in my inbox this morning. While I appreciate their faith in the Thar, this looks like an incredibly dangerous manoeuvre. I appeal to Thar owners to exercise restraint. pic.twitter.com/UpKq5jAG8x

Powered by an mStallion petrol engine and a mHawk diesel unit, Thar now also comes with both manual as well as automatic transmission choices. It's off-road skills remain quite legendary but several owners of the vehicle have often been found performing some very high-risk driving moves that often defy logic and basic sense. Driver negligence has also resulted in a few accident cases which goes to show that even the best of off-road vehicles still require a person behind the wheel who has skill and basic sense.