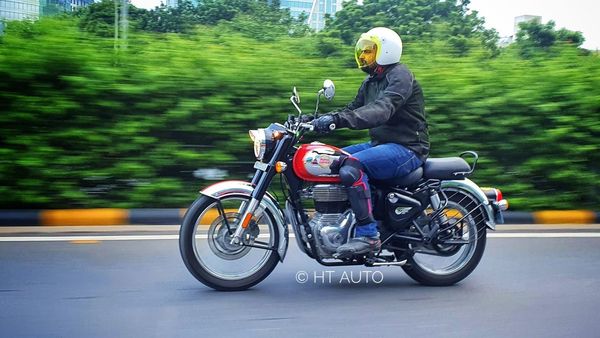 Riding into 2022, Royal Enfield would hope to overcome challenges that face the Indian automotive industry at large, with confidence.

Royal Enfield sold a total of 73,739 units in December, up from 68,995 units in the same month of 2020. While domestic sales dipped marginally - by 0.47%, exports saw a massive jump and this lead to the overall figures rising.

Royal Enfield has been powering its way forward in several key global markets including Japan and in south-east Asian countries. Exports last month were at 8.552 units, up 144.13% compared to 3,503 units sent to overseas markets in December of 2020.

And while domestic sales fell ever so slightly between the two December months, Royal Enfield pointed to a sequential growth of around 45% in domestic sales figures between November and December of last year.

Royal Enfield offers a number of high-selling models in the country. The list includes Classic 350, Bullet 350, Himalayan, Thunderbird 350X, Meteor and others. Recently, the company managed to sell all 120 units of its limited edition anniversary edition Twins motorcycles in a record time of under two minutes. The limited edition 650 twins will also be available for enthusiasts in Europe, Americas and South-East Asia.

Going forward, however, the path is likely to be rather challenging for the Indian automotive industry at large. The rise in number of Covid-19 cases has become a big worry and the possibility of lockdown cannot be ruled out just yet. The Federation of Automobile Dealers Association (FADA) has advised a cautious approach and underlines that the two-wheeler segment could be the most affected.

The rise of electric two-wheelers, however, is more likely to remain robust but how much of an impact it would have on traditional players like Royal Enfield remains to be seen.