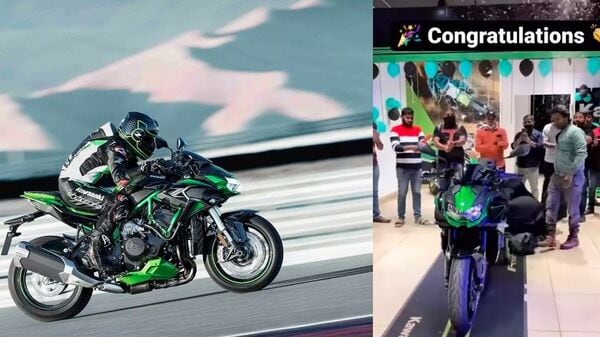 Kawasaki India has announced that it has delivered India's first Z H2 supercharged roadster to a customer in Visakhapatnam, Andhra Pradesh. The company took to its social media handles to make the new announcement.

The new Kawasaki Z H2 supercharged motorcycle (along with Z H2 SE) was launched in the Indian market in January 2021. The motorcycle rivals the likes of other hyper-naked bikes such as the Ducati Streetfighter V4 and the BMW S 1000 R. The Z H2 was launched in India at a price starting at ₹21.90 lakh (ex-showroom). The higher-spec Kawasaki ZH2 SE, which comes with an electronically-adjustable Showa suspension setup will set you back by ₹25.90 lakh.

At the heart of the motorcycle sits a 998cc, in-line four-cylinder, liquid-cooled, DOHC, 16-valve, supercharged engine. This motor has been rated to produce a maximum power of 197.2bhp and comes mated to a six-speed transmission. It also gets the feature of assist and slipper clutch.

Meanwhile, expect Kawasaki to announce the launch of its 50th Anniversary Edition of Z650 RS motorcycle in India soon. The new model would commemorate 50th anniversary of the company's legendary Z1 motorbike.