Herbert Diess tells a German TV channel that there is a need for consumption and that replacing old cars with newer ones will also help in the fight against pollution.
By : Reuters
| Updated on: 28 Apr 2020, 08:29 AM 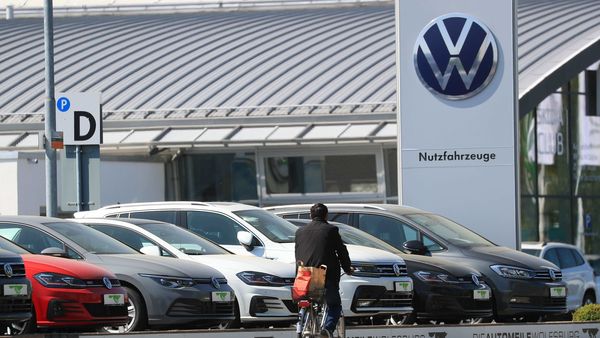 A cyclist passes used Volkswagen AG automobiles on the forecourt of a car showroom in Wolfsburg, Germany.

Volkswagen's chief executive called for a broad stimulus package to revive the auto industry and the economy even as he defended the carmaker's intention to pay a dividend.

"We need consumption, the economy needs to get moving again and an opportunity, perhaps the best opportunity is the car," Herbert Diess told German television ZDF, adding that replacing older cars with more efficient ones would also cut pollution. Diess reiterated the carmaker's intention to pay a dividend for 2019 but said the company would consider cutting bonuses and shrinking the dividend if the carmaker ended up taking state aid.

"We will consider this and the formal decisions have not been taken. But for now VW wants to cope without state aid and the carmaker intends to manage through he crisis without tapping state aid," Diess said.