Ford Bronco and F-150 Lightning are reportedly finding many takers while there is also a demand for models that are more hard to find at dealer lots.
By : Bloomberg
| Updated on: 29 Jul 2021, 09:28 AM

A Ford Motor Co. F-150 Lightning electric vehicle during a presentation in Washington.

Ford Motor Co. overcame a critical parts shortage and managed to post a surprise profit in the second quarter, thanks to surging prices on models that have become harder to find on dealer lots.

The automaker on Wednesday also raised its full-year forecast for adjusted earnings to a range of $9 billion to $10 billion before interest and taxes. That’s an increase of about $3.5 billion from its previous projection and at least triple what it made last year. The Dearborn, Michigan-based company expects sales volume to increase by about 30% in the year’s second half.

“We are now spring-loaded for growth in the second half and beyond because of those red-hot products, pent-up demand and improving chip supply," Farley told analysts on a conference call.

Ford has suffered more than rivals from a shortage of semiconductors because it sourced so many chips from a Japanese factory hit by a fire in the spring. Despite that, the company posted second-quarter earnings of $1.1 billion before interest and taxes, which was well above the $167 million analysts predicted. Adjusted earnings per share came in at 13 cents, beating the 5-cent loss that analysts had forecast.

Shares of the carmaker rose as much as 4% to $14.42 in extended trading after the results were announced. Investors have rallied behind the automaker, lifting the shares 58% this year as of Wednesday’s close.

Well-received new models, such as the F-150 Lightning, the compact Maverick truck and the Bronco SUV, as well as a plan to spend $30 billion to electrify the entire lineup, have buoyed Ford shares. 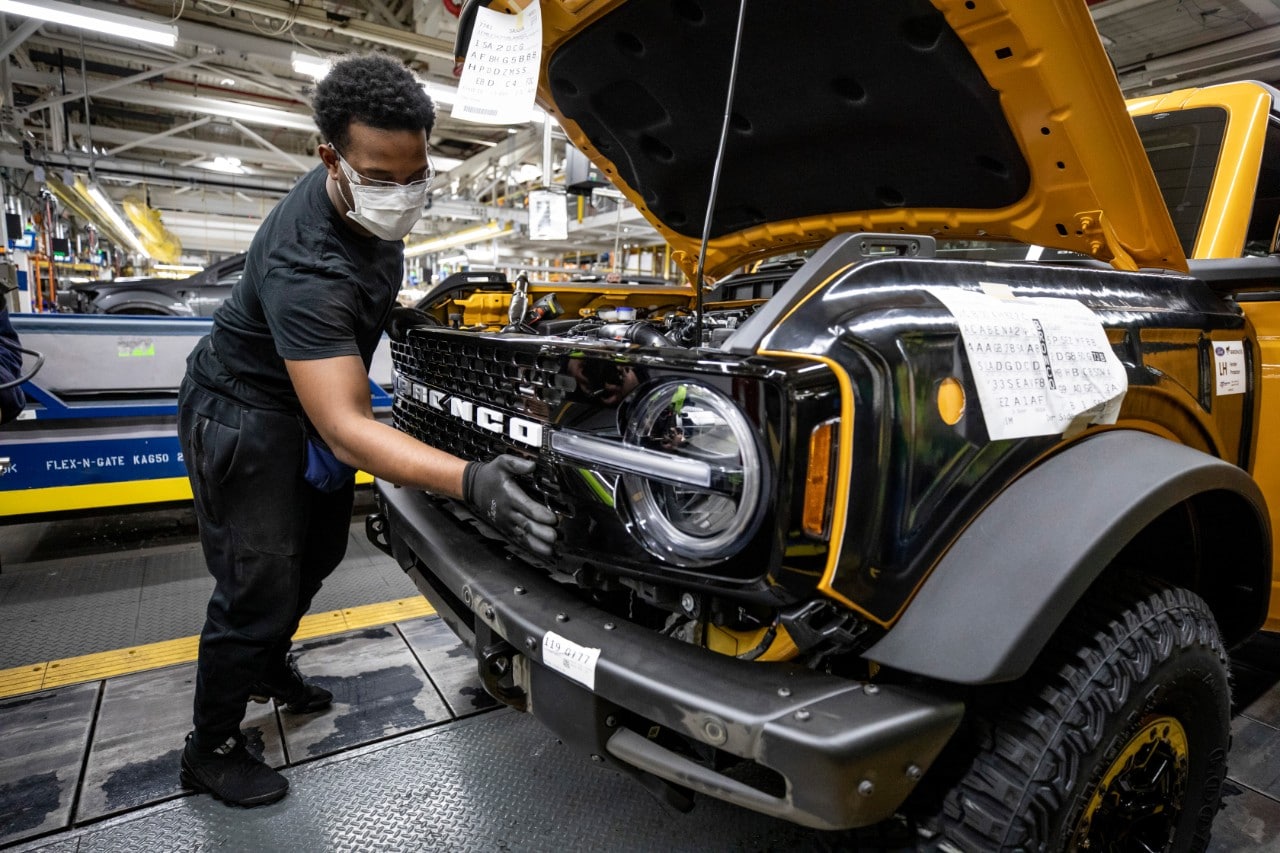 Ford has said that its customers have already booked more than 125,000 sixth-generation Bronco SUVs since the beginning of the year.

Despite the expected increase in volume in the year’s second half, Ford forecast that its earnings before interest and taxes will decline from the first six months of the year.

Chief Financial Officer John Lawler said rising commodity costs will take a $2 billion bite out of earnings in the second half. Ford Credit, the automaker’s lending arm, also will see profit fall by about $1 billion as sky-high used vehicle prices come down to earth. At the same time, Ford will be spending heavily on electrification and automation.

The scarcity of chips has triggered prolonged factory shutdowns and cut inventory on dealer lots by more than half. But that lack of supply drove up the average price of a new Ford model to a record $47,446, according to researcher Cox Automotive.

Farley said last month that even after the chip crisis subsides at some point next year, lean inventory on dealer lots will be the “new normal" in order to keep prices high. He told analysts Wednesday that Ford is moving to an order-bank system rather than flooding dealer lots with multiple versions of every model.

The automaker had seven times more orders at the end of the second quarter than it did a year ago, he said. Switching to orders will help Ford rein in the thousands of dollar per vehicle it spends on incentives to move the metal off dealer lots.

“I know we’re wasting money on incentives, I just don’t know where," Farley said. “With an order-based system, we’ll have much less risk of that."

U.S. vehicle sales rose 9% in the quarter, but fell sharply in June as inventory dried up. Ford’s gains in the quarter were far short of the 50% rise in the U.S. overall, which caused the automaker’s share in its home market to plummet to a six-year-low of 10.7%, down from 14.7% a year earlier, Cox said.

Revenue rose 38% to $26.8 billion in the second quarter, more than the $23 billion analysts expected, driven by strong sales in its home market.

Ford Credit earned $1.6 billion before taxes, thanks to high resale prices on used vehicles. That was the biggest contributor to the bottom line in the second quarter.

North American operations drove Ford’s earnings, with income before interest and taxes of $194 million. That compares with a loss of $974 million a year ago when the pandemic hit and factories closed for two months.

The automaker continued to lose money in most of its other key regional markets, including Europe, China and South America.

In Europe, Ford posted a loss of $284 million, an improvement from the $664 million it lost there a year earlier. Sales in the 20 key European markets rose 44% over the previous year, but were down significantly from 2019.

Ford also saw more red ink in China, the world’s largest auto market. It reported a loss of $123 million, slightly better than the $136 million it lost a year ago. Sales in the Chinese market rose 24% in the quarter, as deliveries more than doubled for its Lincoln luxury line. Ford sold nearly twice as many Lincolns in China in the quarter as it did in the U.S.

In South America, where Ford is ceasing manufacturing in Brazil after more than 100 years, the company lost $86 million, compared with a loss of $165 million a year earlier.