Watch: This Toyota Hilux on six wheels is built for accepting extreme challenges

The Toyota Hilux six-wheeled pickup truck has been developed by Arctic Trucks and this rig is built for conquering Antarctica.
By : HT Auto Desk
| Updated on: 29 Jul 2022, 09:18 AM 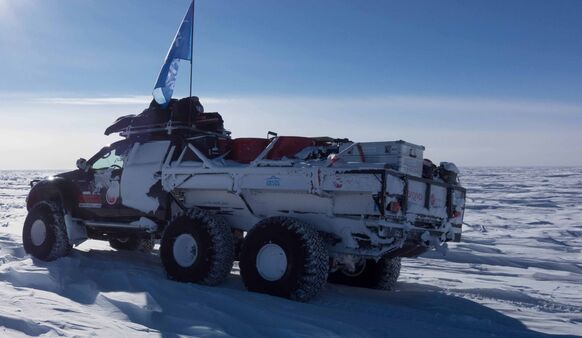 The modified Toyota Hilux pickup gets three axles and power to all the six wheels.

Toyota Hilux is one of the toughest offroaders in the world, but Arctic Truck attempted something insane to make the Japanese off-roader even more capable of taking on extreme challenges. To make a well-capable vehicle for an expedition in Antarctica, it made a rig out of the Toyota Hilux, christened as AT44. The first thing you will notice about this vehicle is the six wheels instead of the standard four. Also, all six wheels get power from the powertrain of the pickup truck. The third axle was added to the pickup for various reasons.

Dubbed the Hilux AT44 6x6, the monster pickup truck has been built for extremes, and it has been featured by Ridiculous Rides by Barcroft Cars on YouTube.

The Arctic Truck first disassembled a Toyota Hilux to make the Hilux AT44 6x6. Around 80 per cent of the frame was replaced with more robust material, while 20 per cent of the vehicle was rebuilt entirely from scratch. This not only strengthened the chassis of the vehicle but added more masculinity to the pickup truck. The customiser claims that around 500 hours were spent modifying the rig, including processes to strengthen the suspension and improve the off-road machine's centre of gravity.

The Hilux AT44 6x6 draws power from a 3.0-litre diesel engine that's retuned to consume jet fuel. This ensures that the fuel is still potent up an extremely low temperature of -43 degrees Celsius. In an attempt to extend the range of the truck, it gets a 750-litre fuel tank and can carry up to 1,400 litres of fuel barrels.

The monster truck runs on a set of 44-inch tyres with soft side walls, which are beneficial when the tyres are required to be deflated for better traction. With six wheels in action, the pickup gets more traction and more floating. Also, it can carry more payloads and go steeper as well.