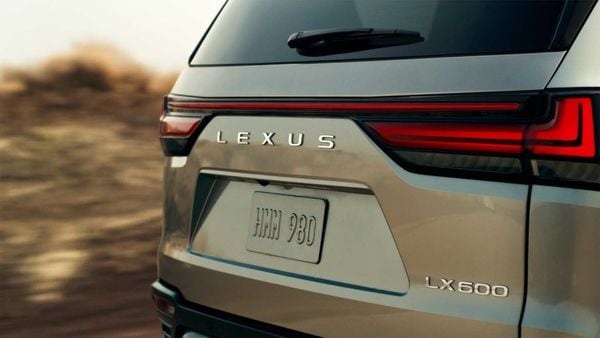 New generation Lexus LX will be uncovered on October 14.

Since Toyota introduced its new Land Cruiser, there has been speculation about its more luxurious sibling Lexus LX. The Toyota owned luxury car brand has now teased the upcoming new generation Lexus LX600. The luxury SUV is scheduled to be unveiled on October 14.

Lexus has released a short video teasing a few design elements of the new generation LX. The teaser video reveals the rear profile and new L shaped LED strips in form of taillights. The brand emblem has been replaced by Lexus lettering, while LX600 nomenclature too is visible on the tailgate.

Other design elements revealed in the teaser video include muscular front fenders and door-mounted mirrors.

The new generation Lexus LX luxury SUV is built on the same architecture that underpins Toyota Land Cruiser. The platform uses a ladder frame chassis with elements from the GA-F platform.

The second-generation model of Lexus LX was launched back in 2007. After that, the car has received updates in 2010, 2012 and in 2015. This time, the luxury SUV is all set to receive a clean sheet design overhaul.

Speaking about the features and technologies on board, expect some of them to come similar to the Toyota Land Cruiser. On powertrain front, new generation Lexus LX is expected to get a twin-turbocharged 3.5-litre V6 engine that is capable of churning out 415 PS of power and 650 Nm of torque output.

The hybrid variant LX750h could use the same engine with an electric motor. Combined, this hybrid powertrain will be able to belt out 487 PS of power and 871 Nm of torque. Power will be sent to all four wheels via a 10-speed automatic transmission and an all-wheel-drive system will be the standard system.