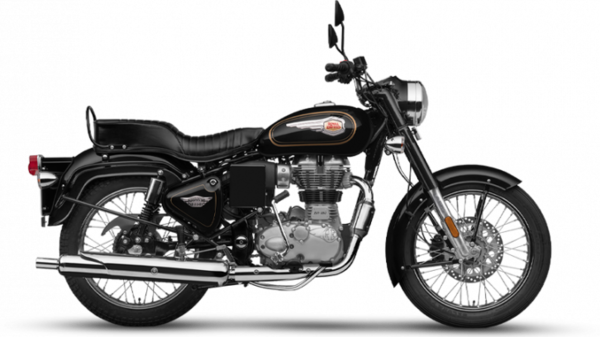 Royal Enfield Bullet 350 received the BS 6 update earlier this year in March. It was launched at a price tag of ₹1.21 lakh*, now the bike has received its first price hike of ₹2,755. This is still the most affordable Royal Enfield present in the Indian market.

The Bullet 350 BS 6 (Standard) in Bullet Silver and Onyx Black colours has been priced at ₹1.24 lakh* and in Black and Forest Green colours it is priced at ₹1.30 lakh*. The higher Bullet 350 ES BS 6 (Electric Start) is available in Jet Black, Regal Red and Royal Blue colours and costs ₹1.39 lakh*.

At the heart of the Bullet 350 BS 6 sits an updated 346 cc single-cylinder engine which now features fuel injection. This engine delivers 19.1 PS of maximum power at 5,250 rpm and 28 Nm of peak torque at 4,000 rpm. This unit comes mated to a 5-speed gearbox.

The most affordable Royal Enfield in the country features 35 mm telescopic front forks and 5-step preload-adjustable twin rear shock absorbers. Its braking duties are performed by a 280 mm front disc and a 153 mm drum brake at the rear. The bike features a single-channel ABS.

Some of its exterior highlights include classic rearview mirrors, chrome exhaust, tiny fog lamps on either side of the headlamp, circular headlamp featuring a chrome mask, etc.

The Bullet 350 BS 6 isn't the sole Royal Enfield to have received a price hike recently. Read about the new prices of Himalayan BS 6 and Classic 350 BS 6.

Royal Enfield has recently announced the resumption of its manufacturing and dealership level operations in-line with the latest government directives. (More information here).