Volkswagen, Renault fire up factories in bet that car demand will follow

The balancing act between preserving cash and spending some to try to sell cars is entering a crucial phase as European countries, hard-hit by the coronavirus, start to ease the lockdowns.
By : Bloomberg
| Updated on: 23 Apr 2020, 02:46 PM 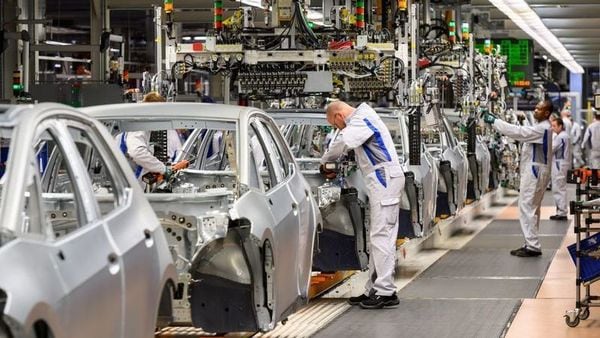 Manufacturers from Volkswagen AG to Renault SA and Daimler AG are restarting factories in Europe with little visibility about how much actual demand there will be once customers emerge from restrictions that made car-buying impossible for most people.

VW, the world’s largest automaker, is pressing ahead with production of the coming ID.3 electric car on Thursday, and said it expects to start European deliveries this summer as planned. Efforts to finish the car’s software are “on the home stretch" and the schedule for the rollout at VW’s German factory in Zwickau remains unchanged, the company said.

Daimler is gradually resuming output of engines and components this week to prepare for key models including the EQC electric SUV. The maker of Mercedes-Benz luxury cars offered a fresh reminder of the risks when it scrapped its forecast for the full-year.

The balancing act between preserving cash and spending some to try to sell cars is entering a crucial phase as European countries, hard-hit by the coronavirus, start to ease the lockdowns that have kept potential buyers indoors for weeks. Volkswagen has made clear it won’t back down on its push for the ID.3, its most important new model in decades, while Peugeot maker PSA Group says it sees no need to add to inventories while sales are dormant.

Getting the calculation right is a major test for automotive CEOs, as they seek to pad liquidity while safely restoring the intricate supply links required for a return to normal times. Carmakers have prepared wide-ranging hygiene measures, including disinfectants in dealerships, to minimize contagion risks in showrooms or during the handover of cars to customers.

For VW, selling the ID.3 in substantial numbers is mission-critical. It’s the first purely battery-powered car based on new standardized underpinnings for mass-market vehicles, helping the German automaker comply with stricter emission rules in Europe. The new technology, dubbed MEB, is due to be rolled out at two large factories in China later this year.

VW officials in recent weeks have acknowledged complications during the software development, but have dismissed reports the project will be delayed. The coronavirus outbreak brought production to a standstill last month, stoking further uncertainty over the carmaker’s ability to stick to the planned schedule.

Aston Martin Lagonda Global Holdings Plc has opted for a more cautious approach. The British manufacturer said Thursday it intends to reopen its St Athan factory in Wales on May 5. Operations at its main site in Gaydon, England, “are planned to resume later."

The restarting of factories in France has received pushback from some unions including the CGT, which has argued that the business isn’t essential for the economy. Yet Renault, tire-maker Michelin and Toyota Motor Corp. are pushing ahead.

Renault this week began a gradual reopening of sites in France, starting with three engine and parts factories and as little as a quarter of employees working with strict health measures such as temperature monitoring, wearing protective gear and extra cleaning. The company already restarted in countries including Spain, Portugal, Morocco and Russia.

The struggling carmaker, which is working to cut costs and negotiate billions of euros in state-backed loans, plans to reopen its Flins plant near Paris making the Zoe electric car this month. The new battery-powered model was a rare bright spot in dismal quarterly sales published Thursday showing a 19% drop overall and cash burn of 5.5 billion euros.

PSA, which also makes the Opel, Vauxhall and Citroen brands, held back on giving a date to restart its European factories. Chief Financial Officer Philippe de Rovira said this week the company doesn’t want to starting building up inventories before dealerships have reopened.

The French carmaker has forecast the European car market will shrink by a quarter this year and said it’s even prepared for a 50% drop. PSA and Renault have combined inventories of 1.375 million cars.

“If we restart production, it’s because we are selling cars," de Rovira said on a call. “It’s important to have dealership and sales activity before we push the button."