Global car manufacturers have been shattered by the coronavirus outbreak spilling over from China to Europe and North America.The financial fallout from forced factory shutdowns aimed at minimizing contagion risks is set to trigger the deepest economic crisis since World War II.
By :
| Updated on: 17 Apr 2020, 09:30 AM 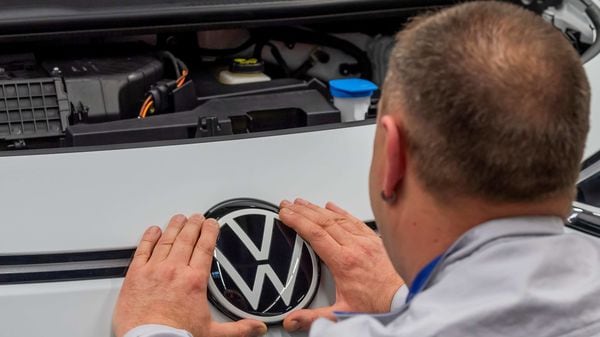 File photo: An employee fixes a VW badge at a production line for the electric Volkswagen model ID.3 in Zwickau, Germany.

Volkswagen AG’s main car brand will begin restarting production outside China next week after the pandemic coronavirus outbreak brought sales and manufacturing to a halt in key markets.

The German electric-car site in Zwickau and the Slovakian factory in Bratislava will lead the effort in the week starting April 20, VW said Wednesday in an emailed statement. VW’s other German sites, as well as factories in Spain, Portugal, Russia and the U.S. are due to follow in the week after.

“With the decisions by federal and state governments as well as the easing of measures in other European countries the framework conditions have been created to be able to restart production," VW brand Chief Operating Officer Ralf Brandtstatter said in the statement. “We’ve also pushed forward the recovery of our supply chains," he said.

(Also read: Why global car makers could slog and stutter before reopening factories)

Global manufacturers have been shattered by the virus outbreak spilling over from China to Europe and North America. The financial fallout from forced factory shutdowns aimed at minimizing contagion risks is set to trigger the deepest economic crisis since World War II.

The factory freeze is starting to thaw, after the European Union laid out a framework for reopening economies and countries like Germany setting out concrete plans to ease restrictions.

French carmakers are also preparing for a gradual restart of their European factories. Renault SA has reopened a portion of operations in Portugal and Russia. PSA Group, the maker of Peugeot, Citroen and Opel, is testing out Covid-19 preventative measures at a plant outside Paris that’s been deployed to make ventilator parts.

(Also read: Masks are must: How automakers are gearing up to resume factory productions)

Starting in the week that begins May 4, VW said its plants in South America, Mexico and South Africa are due to resume output. The effort to restore production is expected to last throughout the course of May, the company said.