Home Auto Cars News Masks Are Must: How Automakers Are Gearing Up To Resume Factory Productions

Masks are must: How automakers are gearing up to resume factory productions

From wearing masks at all times and realigning assembly lines to even deferring meal times till after the shift, car makers are gearing up for a significantly altered work culture, especially at production facilities.
By : Shubhodeep Chakravarty
| Updated on: 10 Apr 2020, 09:52 AM 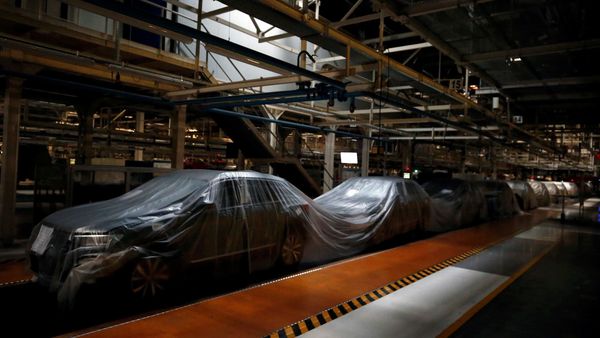 An empty assembly line is pictured at Autoeuropa Volkswagen car factory during partial lockdown as part of state of emergency to combat the coronavirus disease (COVID-19) outbreak in Lisbon, Portugal.

Car factories have been uncharacteristically silent for weeks in many countries severely affected by the coronavirus. In some countries, the silence has been for months. With production levels in the first three months of 2020 at alarming lows, may car makers are now racing to get back to work in countries emerging from the dark clouds of the diesease.

Resuming work, however, may be a crawl, let alone a race.

With the threat from coronavirus still lingering in countries which are reporting fewer positive cases each day, auto giants want to leave nothing to chance in their bid to restart work. Italy, for instance, saw the worst of coronavirus and is still reeling from it. Here, Ferrari has reportedly offered voluntary blood tests to its employees in case they want to check if they were exposed to the virus.

Reuters has reported that General Motors in the United States has put in place measures to have thermal screening of all its workers whenever it is that they are asked to return to work, a procedure taken out of Amazon's strategy book for its warehouse employees.

Reuters has also reported that many car makers are planning on steps that would increase social distancing like rearranging assembly lines to maintain proper distance between workers, moving meals to the end of the shift so that workers don't return back to their respective duties together and making wearing masks an absolute necessity.

Several car makers in the United States aim at resuming work by the beginning of May. In Europe, there is no clear dateline but even here, companies want to get back up and running as soon as is realistically possible.

Behind the need for resuming work is the driving force of the auto industry taking a massive beating. Global demand for vehicles has nosedived since the coronavirus outbreak and the consequent lockdown in several countries has hardly helped the cause. Since the outbreak was first reported in China, the world's largest auto market as well as manufacturer, supply lines have been affected as well.

It is a massive challenge for car makers around the world and industry experts are mostly sure that layoffs would be one of the several drastic measures that would be taken in the upcoming months. Bloomberg recently reported that several Japanese car makers are already cutting pay to some 32,000 workers in North America. Japan is also offering incentives to its own car makers to leave China and set up production facilities in their home country.

Clearly then, the slump in the world economy and the beating that the auto industry in particular has taken are likely to have far-reaching consequences.