Companies across the auto industry are taking measures to conserve cash as they face uncertainty both with regard to how soon they’ll be able to reopen operations and how long it will take for demand to recover.
By : Bloomberg
| Updated on: 09 Apr 2020, 09:16 AM 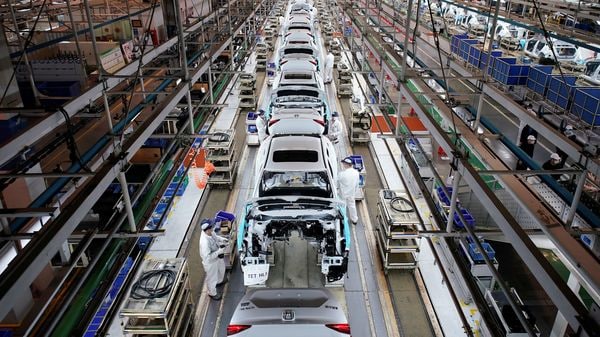 While Toyota Motor Corp. isn’t furloughing any of its direct employees in the U.S., Canada or Mexico, the car maker said Wednesday that it will no longer pay the roughly 5,000 people that temp agencies employ to help staff its idled plants in the region. The company will continue to provide benefits for the time being.

Companies across the auto industry are taking measures to conserve cash as they face uncertainty both with regard to how soon they’ll be able to reopen operations and how long it will take for demand to recover. Tesla Inc. and BMW AG have also announced plans within the past day to furlough untold numbers of American workers.

Toyota is extending the shutdown of its North American vehicle and parts factories a third time, citing the coronavirus outbreak and weak demand. The automaker now intends to reopen the facilities on May 4, two weeks later than planned.

Toyota will continue to pay full-time production workers, though the company is asking them to either use two paid-time-off days during the longer shutdown, or forgo two days of pay.

The automaker’s U.S. sales plunged 37% last month to just 135,730 cars and trucks, its worst March since 2011, when a tsunami hit Japan and disrupted North American imports of vehicles and parts. Industrywide, U.S. deliveries ran at the slowest pace in a decade and are expected to fall further in the months to come.

Toyota has also idled factories in Europe and curbed production in Japan and elsewhere in Asia. It’s offered to help boost production of medical supplies in both the U.S. and Japan.