The state government has also decided to open tyre puncture and repair shops located on the highways and main roads in the state to help truckers and other commuters.
By : PTI
| Updated on: 29 Apr 2020, 08:48 AM 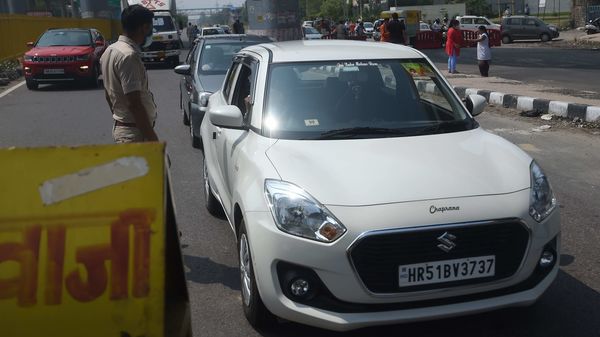 Vehicles are stopped at the state border to cross to Delhi after Haryana government sealed its border with the national capital.

The minister added that to provide relief to the people amid the nationwide lockdown, the state government has also decided to extend the validity of various vehicle-related documents till June 30, 2020. The documents include vehicles’ fitness certificates, permits, drivers’ licenses and other documents valid till February 1, 2020, he said.

“In addition, all registration authorities have been directed to register BS 4 vehicles sold before April 1, 2020 by specially opening the office by April 30," he said during a video conference of various states’ Public Works and Transport Ministers with Union Road Transport and Highways Minister Nitin Gadkari. He apprised the Union minister that as per the directions of Chief Minister Manohar Lal Khattar and guidelines of Union Home Ministry, the state government has also decided to open ‘dhabas’ and tyre puncture and repair shops located on the highways and main roads in the state in consultation with the concerned deputy commissioners.

He further said that the officials have been directed to take special care of social distancing and sanitization and to ensure that all those working at these ‘dhabas’ and tyre puncture and repair shops are wearing masks.

Deputy Chief Minister Dushyant Chautala, who was also present in the meeting held through video conference, urged the Centre to increase the economic activities after the lockdown period and provide an additional fund of ₹250 crore to the state for the year 2020-21 for the projects of National Highways Authority of India.

Apart from this, he also requested for immediate approval of four projects to be approved by the Central Government. These include the approval of National Highways Authority of India for Rohtak-Jind Road project and Delhi-Panipat Expressway Project.

Chautala also urged the Union minister that as he had said in his address that about ₹25,000 crore has been earmarked separately for each state for land acquisition, a secretary-level officer should be appointed separately by the Central Government for Haryana to take care of this work, the statement said.