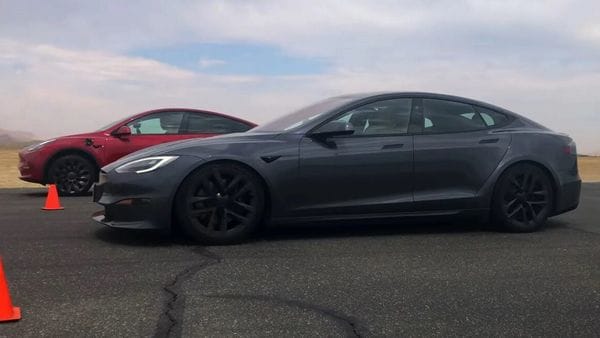 The new Tesla Model S Plaid created quite some headlines with its performance and features. Since the electric has broken cover, there's a lot of proof about its insane acceleration capability. While it has already locked horns with Porsche Taycan Turbo, Ford Mustang Shelby GT500 and others for drag races, now it was time for a Tesla Model Y Performance.

A video has surfaced on the internet showing the Tesla Model S Plaid taking on its sibling Model Y Performance for a drag race. The Model Y Performance too is a very fast car and it has already beaten models like Ford Shelby GT500, Jeep Grand Cherokee and Porsche Taycan in drag races.

So how was the Model Y Performance's performance against Model S Plaid?

The Tesla Model S Plaid took the crown in the race and covered a quarter-mile distance two seconds faster than its sibling. While it took 9.4 seconds to cover the distance, Model Y Performance took 11.8 seconds for the same.

Interestingly, since Tesla Model S Plaid has launched the owners are trying different things with their brand new electric sedan. One person even tried to take the EV underwater and attempted to run it like a submarine. The experiment was not completely successful though. Instead of going underwater and playing submarine, the Tesla Model S Plaid choose to act like a boat.

The Tesla Model S Plaid comes as the quickest production car in the world. This electric sedan gets three different electric motors. It can run at a top speed of 321 kmph and has an acceleration capability of 0-96 kmph in 1.99 seconds. The electric powertrain on board is capable of churning out 1,020 hp of power output.