The Tesla Model S Plaid attempted to be a submarine but acted like a boat instead.The video appeared to have taken inspiration from Jeep Wrangler EV's video.
By : HT Auto Desk
| Updated on: 13 Sep 2021, 11:46 AM 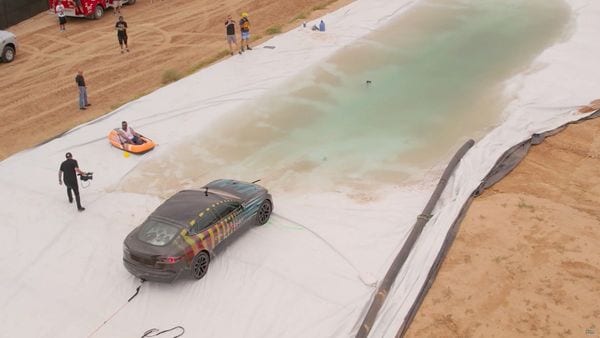 You got a brand-new Tesla Model S Plaid in your garage. What would you do with it? Of course, take it out for driving and belt out your adrenaline rush. But, there are automobile enthusiasts who think different do things different that appear crazy to the rest of the world.

Also Read: A laser beam can be your next windshield wiper, not metal and rubber. Know more

Exactly something like that was done by a Youtuber. He tried to drive his brand new Tesla Model S Plaid under 7 feet of water like a submarine. It seems he got the idea from Jeep's electric Wrangler's teaser video that showcased the Wrangler EV acting a submarine underwater. Also, this kind of experiment might become a common thing in future. This video also reveals why driving underwater is not at all easy.

Theoretically driving an EV underwater should be easier than driving an internal combustion engine-powered vehicle. However, there is always the risk of water seeping into the electrical system and shorting.

While EVs are well insulated to handle a good amount of water, but there are always risks.

The video shows the care floats with nearly 1,814 kg weight rather than sinking into the deep water-filled ditch. Clearly, the experiment went as a flop, as the car refused to sink underwater. At the end of the video, it finally drove itself out of the water. The video also reveals that despite additional insulation to prevent it from taking in water, the car actually gets water inside it.

A reason for the car floating instead of submerging is that the EVs don't require air intake to the powertrain as the ICE vehicles do. This allows the EVs to be insulated in a better manner than the ICe vehicles.

While many viewers found the video just as a waste of time, you might find it different. We leave the judgement up to you.