The fourth generation Sorento SUV gets new a hybrid option for the first time, beside changes in design elements.Kia has sold more than three million Sorento models worldwide since it was launched in 2002.
By : Sabyasachi Dasgupta
| Updated on: 10 Feb 2020, 11:28 AM 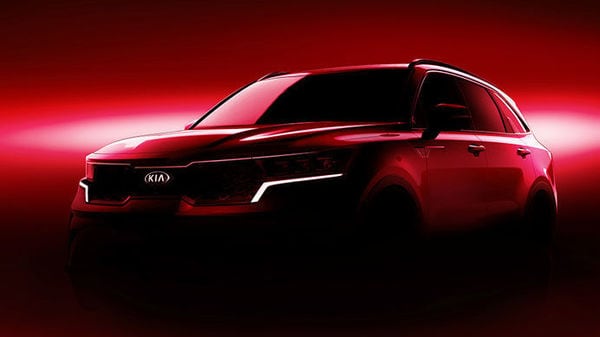 Kia Motors has announced that it will debut its all-new flagship SUV Sorento at the 2020 Geneva Motor Show on March 3. This will be the fourth generation Sorento to be globally unveiled by the company.

Sorento is the first vehicle based on the new mid-size compact SUV platform. The company claims the new Sorento is designed to ‘take everything life can throw at it’ with the promise that the compact SUV will standards in segment practicality.

On the inside, Kia promises Sorento will offer space on a par with larger vehicles. It is also likely to have a lot more features than the previous models. Kia is targeting the global SUV market by applying a range of innovations to the new Sorento, including advanced driver assistance systems and progressive connectivity and infotainment features. It is likely to continue features like a 7.0-inch touchscreen infotainment with Android Auto and Apple CarPlay, one-touch sliding and folding rear seats, remote keyless entry, and hill-start assistance.

The new model also marks the first-time adoption of hybrid power in the Sorento line-up. It is likely to be the conventional hybrid version rather than a plug-in hybrid.

There is no official word on the more orthodox powertrains yet. The Sorento is Kia's only seven seat SUV, and comes with a choice of diesel or petrol engines and front or all-wheel drive (AWD) options.

A mainstay of Kia’s global line-up, more than three million Sorento models have been sold worldwide since it was launched in 2002. The new Sorento SUV is likely to be launched in Korea first, and then in US.