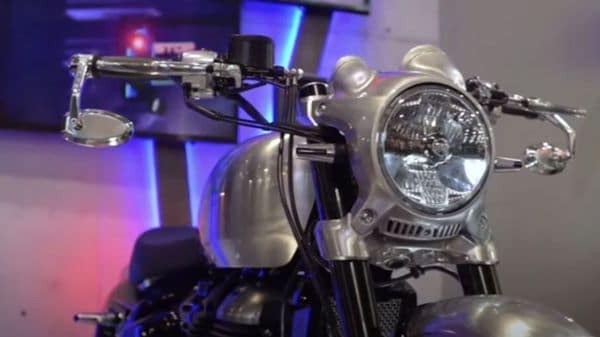 The motorcycle with its retro charming style also blends the transition of the old-school analogue age and the modern digital era. The concept motorcycle also comes paying homage to Royal Enfield's rich legacy of custom motorcycles.

The Royal Enfield SG650 concept gets heritage-inspired polished aluminium front fascia. It gets a digital graphic on the fuel tank indicating the transition from the analogue to the digital era.

The headlamp of the motorcycle concept gets a LED unit and integrated LED daytime running light. The sleek LED turn indicators at both ends of the aluminium headlamp cluster are also visible. It comes with a dual pod instrument cluster. At the back, there is a retro-themed circular taillight.

The motorcycle gets a chunky fuel tank that is CNC billet machined from a solid aluminium block. Atriumgular shaped wide seat is also there. The floating seat is handstitched and wrapped with black leather paying homage to the brand's past.

The motorcycle concept gets upside-down front forks, integrated aluminium top yoke and low rising extra wider bars. The switch cubes are all aluminium. Moving to the back, it gets twin rear shock absorbers, which are mounted to a classic chassis loop. The two exhausts are painted in all-black.

The dual cradle frame houses the same parallel-twin 650 cc engine that works in the Interceptor 650 and Continental GT 650. This engine is capable of churning out 47 bhp of power and 52 Nm of torque.