Kawasaki Ninja ZX-25R gets an official race treatment in Japan

Like all race-prepped bikes, this Kawasaki Ninja ZX-25R features a number of performance oriented updates with a sole purpose of making it faster on the race-track.
By : Prashant Singh
| Updated on: 31 Mar 2020, 05:32 PM 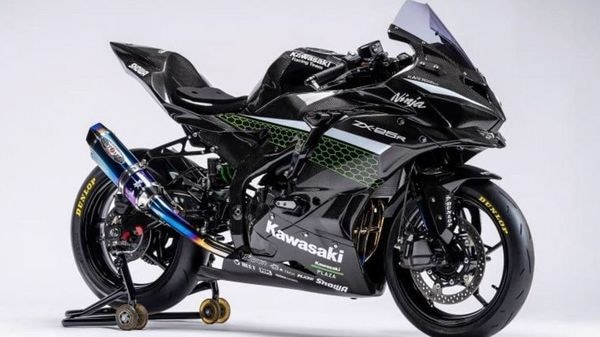 Kawasaki Ninja ZX-25R, the most lethal quarter-litre sports bike on planet, has received an official race-spec update in Japan. This race version ZX-25R will be used by the Kawasaki's One-Make Racing Championship team.

Like all race-prepped bikes, this ZX-25R features a number of performance oriented updates with a sole purpose of making it faster on the race-track.

On the outside, the bike sports a blacked-out glossy bodywork instead of the Kawasaki's signature green colour. The only green highlight on the bike remains on its side fairing in the form of honeycomb graphics.

Bits like the racing cowl, seat cowl, and the race tank pad have been sourced from A-TEC. It has been given high-spec Showa suspension set-up and the original tyres have been swapped with race-spec rubber from Dunlop. Moreover, the bike also uses racing parts sourced from the brands like BEET, RK and SNIPER.

In terms of mechanical, the bike runs on the same 249 cc, in-line four cylinder engine which red-lines at mind-boggling 17,500 rpm. While the official output figures aren't confirmed yet, but the engine (in stock configuration) is rumored to produce around 59 PS of maximum power. On the other hand, with performance exhaust, free flow air filter and ECU re-mapping, the output can easily be upped to around 68 PS or more.

The company has announced in the past that it will conduct Ninja ZX-25R's One-Make Racing Championship in Japan, starting from 2021. The race, as we known it, will be open for all kind of riders.

The Ninja ZX-25R was also teased officially in a promo video launched a few weeks back. The video shows the motorcycle being ridden by the Kawasaki Racing Team’s World Superbike rider Jonathan Rea and hitting 160 km/hr in its 5th-gear on the Jerez Circuit in Spain. (Watch full video here).