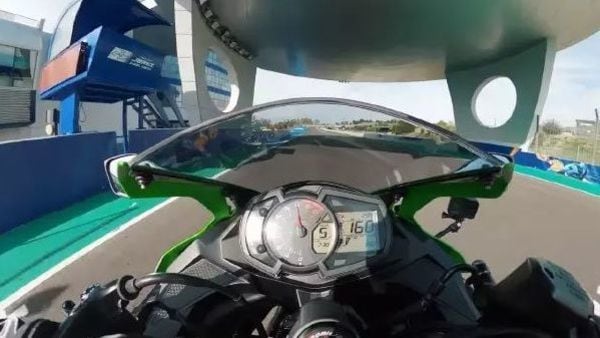 Kawasaki is known for contentiously pushing the envelop and introducing newer technologies which sometimes make other bike makers look stone-age. The introduction of Ninja H2 (five years back) made waves thanks to its 'super-charged' configuration and now the Japanese automaker is in pursuit to bring back the golden-era of motorcycles with its upcoming four-cylinder Ninja ZX-25R, which, of-course, is the smallest installment in the Kawasaki's ZX series.

While other bike makers have already done away with the small-capacity four-cylinder configuration motorcycles, the brand, on the flip-side, is betting big on the ZX-25R, which appears to be more than promising for a quarter-litre package.

For starters, the Ninja ZX-25R is rumored to churn out 59 bhp of maximum power from its 249 cc, in-line four cylinder engine which red-lines at mind-boggling 17,500 rpm. In comparison to other 250 cc bikes, it is around 30 bhp more.

The latest teaser-video launched by the brand shows the bike hitting 160 km/hr in its 5th-gear on the Jerez Circuit in Spain. Of course, being thrashed around by the Kawasaki Racing Team’s World Superbike rider Jonathan Rea does make a difference, but it doesn't change the fact that the bike is more than capable of tearing down ever bigger competitors, thanks to the back-up of more cylinders. And not to miss its exhaust symphony which makes it even more intimidating than it already is.

The company has already initiated pre-bookings on the new Ninja in Indonesia, and the bike will arrive in the dealerships in the first-week of April. The price announcement is said to be made around same time of the next month.

As far as India launch is concerned, the bike may arrive in the country by late-2020. But these are only speculation as of now. As far as local pricing is concerned, it may be a significantly costlier product thanks to its engine. The prices may range somewhere from ₹6 lakh to ₹7 lakh (ex-showroom).