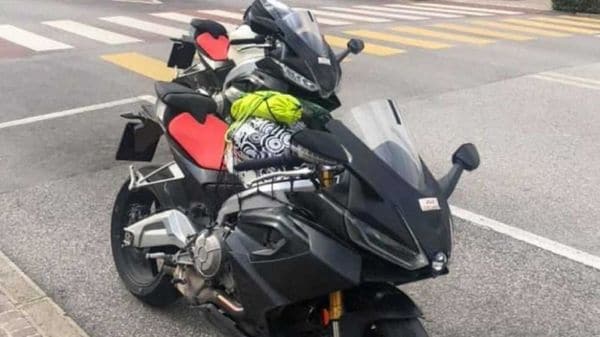 Aprilia, the iconic Italian motorcycle maker is developing a mid-capacity RS660 bike which has been spotted amidst road testing once again. The latest spy images reveal newer details on the upcoming middleweight supersport bike.

The RS660 has already been revealed at the EIMCA 2019 show, and later its official studio images were also published online.

The RS660 comes from the same family as the legendary RSV4 super bike, the company has also teased some of its details in a preliminary brochure which was launched in May. In the same documents, the company shared information of the all-new technical base of the RS660.

The bike employs a 660 cc parallel-twin, liquid-cooled powertrain which has been rated to deliver 100 bhp of maximum power. It will use lighter components and will weigh just 169 kg (dry). Thanks to this, it will have a very aggressive power-to-weight ratio.

As per the latest spy images, there is another model with a slightly revised front-end, featuring a small round LED light positioned in the middle and flanked by the two LED headlamps. This specific bike also has the direction indicators integrated on to the rear-view mirrors unlike the other bike which uses traditionally placed indicators.

Probably, Aprilia is mulling two variants of the bike. One of them will be a standard variant while the other unit might be a premium variant.

While the bike was supposed to debut at the Aprilia Festival in Mugello, but the event was postponed in the view of the coronavirus breakout. However, since things are getting back on the track, the company is expected to make a debut/launch announcement soon.

It will lock horns with the Kawasaki Ninja ZX-6R and the upcoming Triumph Daytona 765 motorcycle.