Kawasaki has started accepting pre-bookings on the Ninja ZX-25R internationally. Its deliveries are slated to begin from December this year.
By : HT Auto Desk
| Updated on: 09 Jun 2020, 09:52 PM 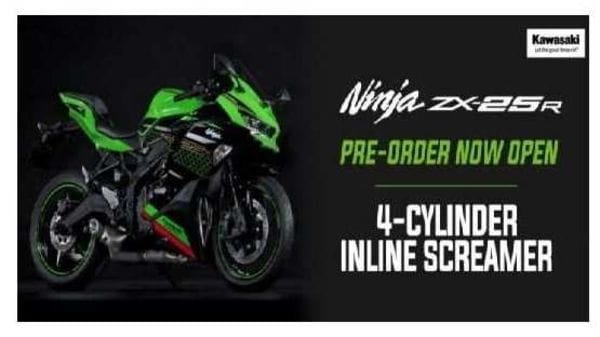 Kawasaki has finally announced pricing of the new ZX-25R motorcycle. The 250 cc in-line 4-cylinder screamer has been priced at NZD 15,990 (excluding ORC) in New Zealand. Sadly, the exorbitant pricing for the quarter-litre motorcycle which packs 2 more cylinders than usual may disappoint some enthusiasts. This pricing converts to ₹7,84,766. (Reminder: At this cost and some additional bucks you can own a 2020 Honda CBR 650R in India.)

The company has started accepting pre-booking on the bike internationally. Its deliveries are slated to begin from December this year.

The bike was initially scheduled for Indonesian launch in early April. However, the event was indefinitely postpone in the view of the virus outbreak. Some reports suggest that the bike will arrive in the Southeast Asian country around July-August this year.

Interestingly, the official specifications of the motorcycle are still undercover. What's known is that its 250 cc, 4-cylinder engine is said to produce power in excess of 45 PS. Other than that, the bike comes loaded with some high-end features and equipment such as Showa SFF Big Piston USD adjustable fork,, horizontal backlink adjustable rear suspension, Quickshifter, ABS, Power modes, Traction control.

Its semi-digital instrument console looks fairly modern and also features a gear position indicator and shift indicator. Kawasaki claims that its high-tensile steel chassis has been developed with learnings from the flagship Ninja H2 hyper bike.

Previously, the company also revealed a race version of the Ninja ZX-25R bike. It will be used by the Kawasaki's One-Make Racing Championship which has been slated to start next year in Japan. The company is also in talks to organise a demo race later in 2020.

Expect the Kawasaki Ninja ZX-25R to land on the Indian shores in early 2021.