Former Indian captain MS Dhoni's collection of expensive bikes is well documented.He was recently seen giving his daughter Ziva a ride on his modified Yamaha RD350 in a video shared by his wife Sakshi Dhoni on social media.
By : Sabyasachi Dasgupta
| Updated on: 03 Jun 2020, 12:28 PM 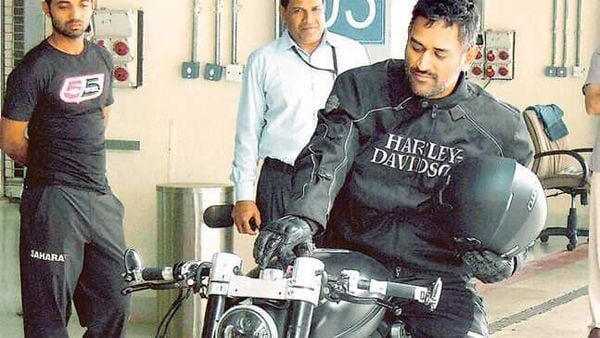 Former Indian captain MS Dhoni's love for bikes is known to all his fans. His passion for motorcycles goes back to his early college days when he used to ride a Rajdoot. Now, he has 9 bikes in his collection of expensive bikes, some of them modified to Dhoni's liking.

His wife Sakshi Dhoni recently revealed the former captain's love for bikes during an interview. She also shared an insight which very few people knew so far. Dhoni loves to modify his own bikes.

During the interview with a sports channel, Sakshi said, "Mahi has 9 bikes. He opened them up, he bought parts and assembled them. He was assembling a bike and fully assembled it and he forgot to put one part and the next day he had to open the bike and he had do it all over again."

Sakshi Dhoni recently shared a video of MS Dhoni giving his daughter Ziva a ride at his farmhouse in hometown Ranchi where the cricketer has been spending his lockdown days. Shared on her Instagram page, Sakshi showed how Dhoni riding his beloved Yamaha RD350 with daughter Ziva sitting as a pillion. The video was also tweeted on Tuesday by Dhoni's IPL franchise Chennai Super Kings. "When 'crazy lightning' and 'happiness' are rolled into one!" they tweeted along with the video.

Dhoni rebuilt his Yamaha RD350 a few years back. It is one of the oldest bikes in his collection.

Dhoni was also spotted riding a Harley-Davidson Fat Boy a few weeks back in his hometown Ranchi. He has a collection of a number of motorcycles such as Yamaha RD350, Ducati 1098, Kawasaki Ninja ZX-14R and many more.

Out of all the bikes, the Kawasaki Ninja H2 and the Confederate X132 Hellcat are the most enticing ones in Dhoni's collection. He is actually the owner of India's first Ninja H2 which was delivered to him back in 2015.